Let’s now look at some terminology, formulas and forces that are used to analyse circular motion.

In uniform circular motion, constant angular velocity can also be defined as

Angular acceleration is the rate of change of angular velocity with respect to time, i.e.

Forces Acting on a Particle Moving in a Circle

Now by Newton’s 2nd Law, we can derive the formula:

which makes an angle 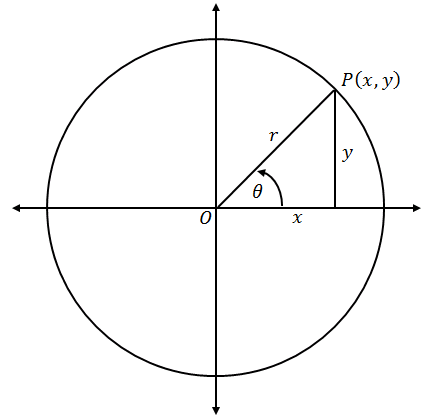 Now by Newton’s 2nd Law, we can derive the formula:

is also called the centripetal force.

The next examples demonstrate some of the concepts we have looked at so far.

round a circle of radius

m. Find the rate at which the angle at the centre of the circle is changing if the centripetal force has a magnitude of 12 Newtons.

m
We also have

A particle of mass

kg is attached to a taut string of length

, which is fixed on the table. The particle moves in a horizontal circle in contact with the smooth table. If the maximum tension that the string can support without breaking is equal to a gravitational weight force on an object of

kg, find the maximum number of revolutions per second that the particle can make without breaking the string.

The tension force is equal to the centripetal force.

in a horizontal circle of radius 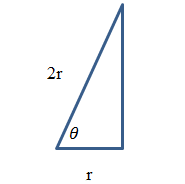 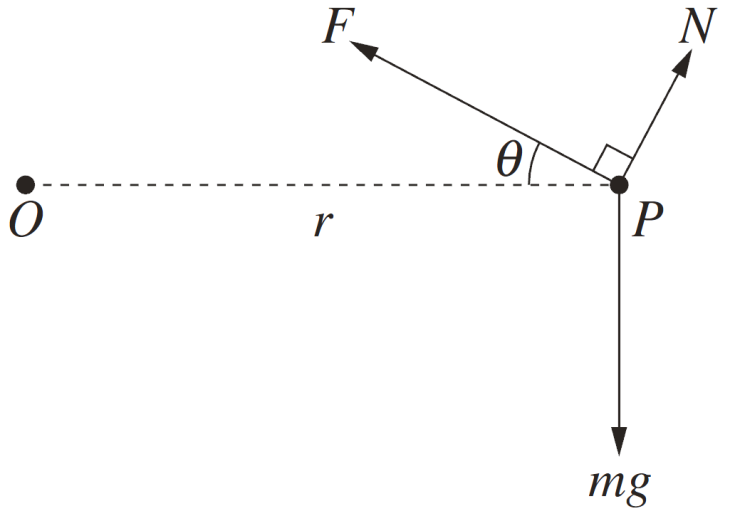 in a horizontal circle of radius

. It is acted on by the force due to gravity,

directed at an angle

above the horizontal and a force

which is perpendicular to

, as shown in the diagram.

(i) By resolving forces horizontally and vertically, show that

(ii) For what values of

Solving simultaneously, we have: 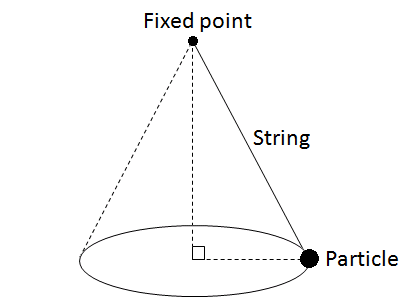 The Conical Pendulum describes the motion of a particle moving in (uniform) circular motion which is suspended from a fixed point by a light taut string. There are different forms of conical pendulum, for example:

When dealing with conical pendulum questions, students need to be able to:

(iii) Solve the question by methods of substitution and elimination.

attached to a string is rotating in a circle of radius

on a smooth horizontal surface. The particle is moving with constant angular velocity

. The string makes an angle

with the vertical. The forces acting on

in the string, a reaction force

normal to the surface and the gravitational force 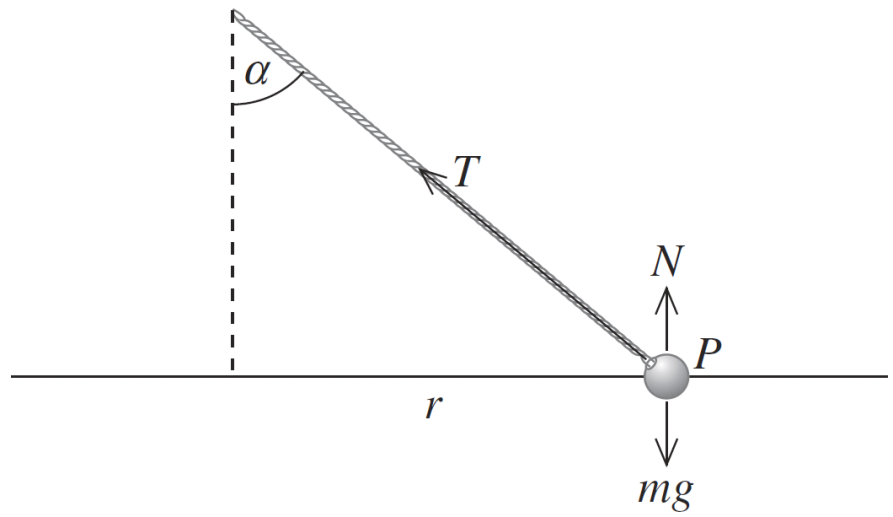 in the vertical and horizontal directions? 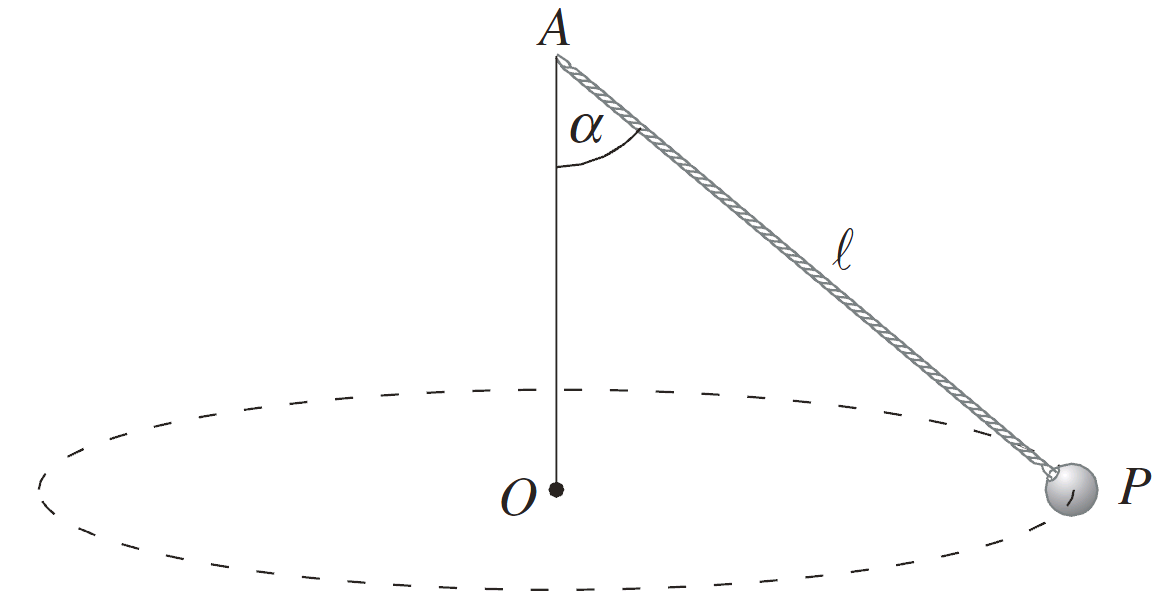 is attached by a string of length

in a horizontal circle with centre

which lies directly below

. The angle the string makes with

The forces acting on the particle are the tension,

, in the string and the force due to gravity,

By resolving the forces acting on the particle in the horizontal and vertical directions, show that

Solving these simultaneously, we have:

We also know that

A small bead of mass

is attached to one end of a light string of length

. The other end of the string is fixed at height

above the centre of a sphere of radius

, as shown in the diagram. The bead moves in a circle of radius

on the surface of the sphere and has constant angular velocity

. The string makes an angle of 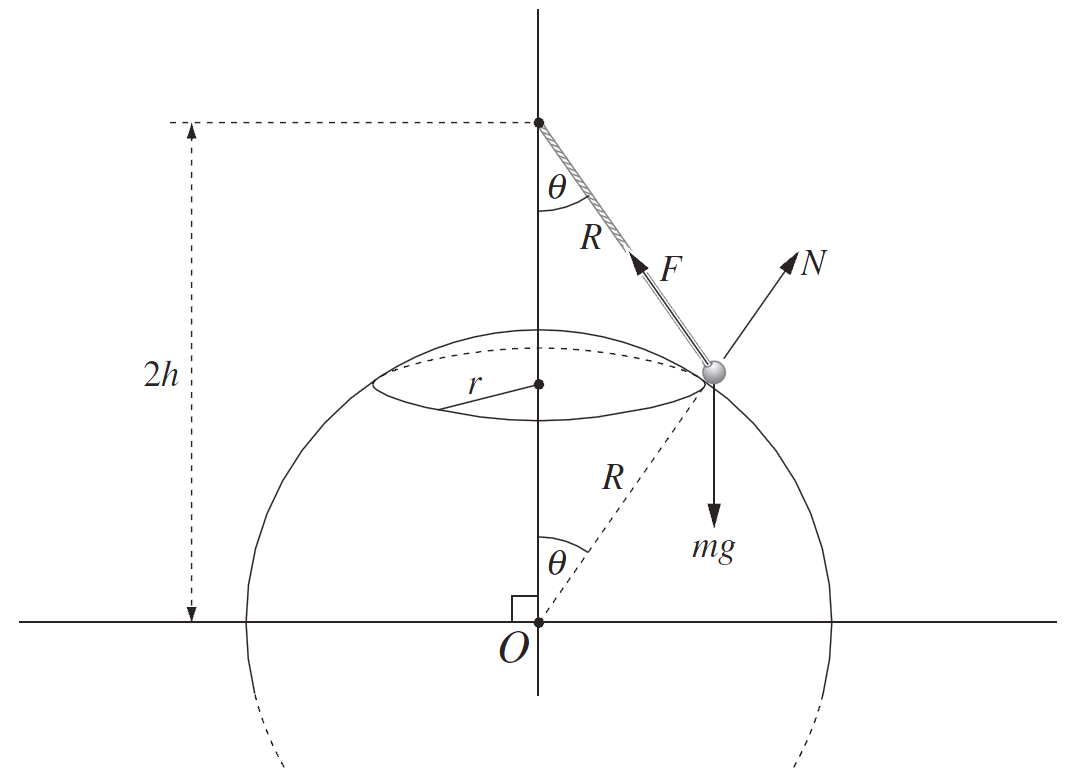 Three forces act on the bead: the tension force

of the string, the normal reaction force

to the surface of the sphere, and the gravitational force

(i) By resolving the forces horizontally and vertically on a diagram, show that

Note that the centripetal force is directed towards the centre (and is the net force). From the diagram above, the force F is contributing positively whereas the force N is opposing the overall force towards the centre. (It may help to draw a line perpendicular to the net force direction, which in this case is a vertical line. Any force to the left of the vertical line in this case would contribute positively to the centripetal force, whereas any force to the right would be negative).

Since the bead is not moving up or down, the net force vertically is 0. Again, the line perpendicular to the vertical motion is a horizontal line, and clearly, F and N are above the horizontal whereas the weight force is below.

We need to eliminate F.

Multiply both sides by

Similarly, for the other equation, multiplying by sin

Divide both sides by

Substituting this in, we have:

A light string is attached to the vertex of a smooth vertical cone. A particle

is attached to the string as shown in the diagram. The particle remains in contact with the cone and rotates with constant angular velocity

on a circle of radius

. The string and the surface of the cone make an angle of

with the vertical, as shown. 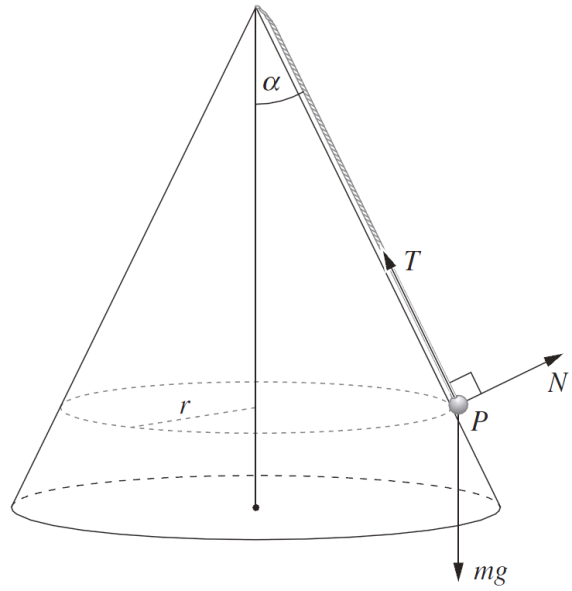 The forces acting on the particle are the tension,

, in the string, the normal reaction,

, to the cone and the gravitational force

(i) Resolve the forces on

in the horizontal and vertical directions.

and find a similar expression for

(iii) Show that if

(iv) For which values of

can the particle rotate so that

is attached by two strings, each of length

, which lie on a vertical line as shown in the diagram. 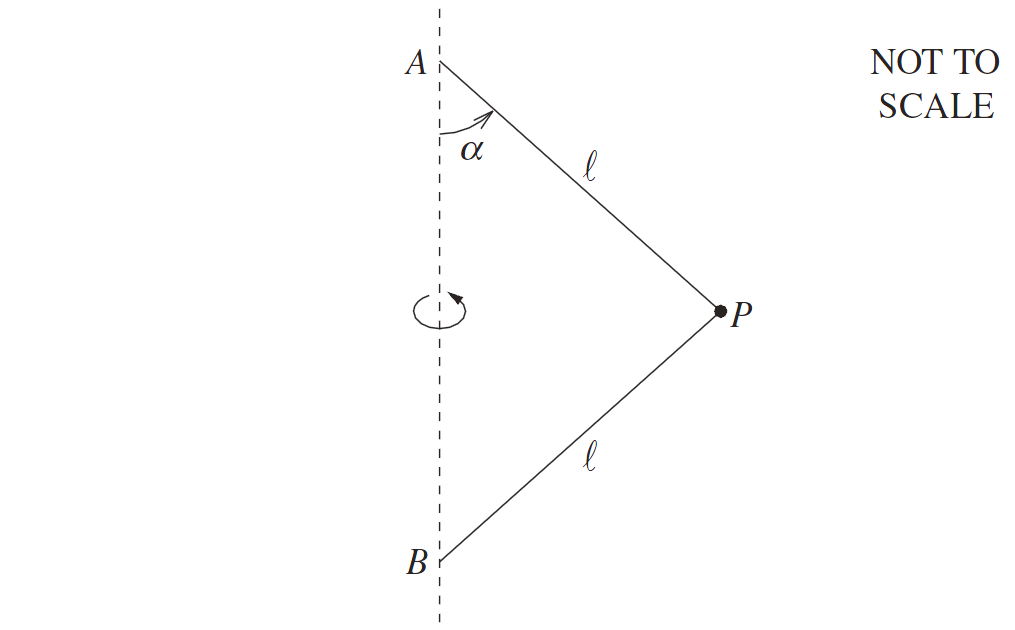 with the vertical. The tension in the string

and the tension in the string

. The particle is also subject to a downward force,

(i) Resolve the forces on

in the horizontal and vertical directions.

, find the value of

Motion around a Circular Banked Track

In this section, we will study the forces of a particle travelling at constant velocity around a banked circular track. Since the track is banked at an angle to the horizontal to minimise the risk of slipping, the force of friction between the particle and the track needs to be considered. Optimum speed occurs when the friction force equals to zero. When dealing with frictional forces, it is required to direct them in the opposite direction to the sliding movement of the particle, in order for the particle to not slip. Let’s now derive the following results as required by the syllabus.

Now analyse the forces on a particle of mass traveling at constant velocity around a horizontal circular arc with radius of curvature on a track that is inclined at an angle to the horizontal, as shown below. 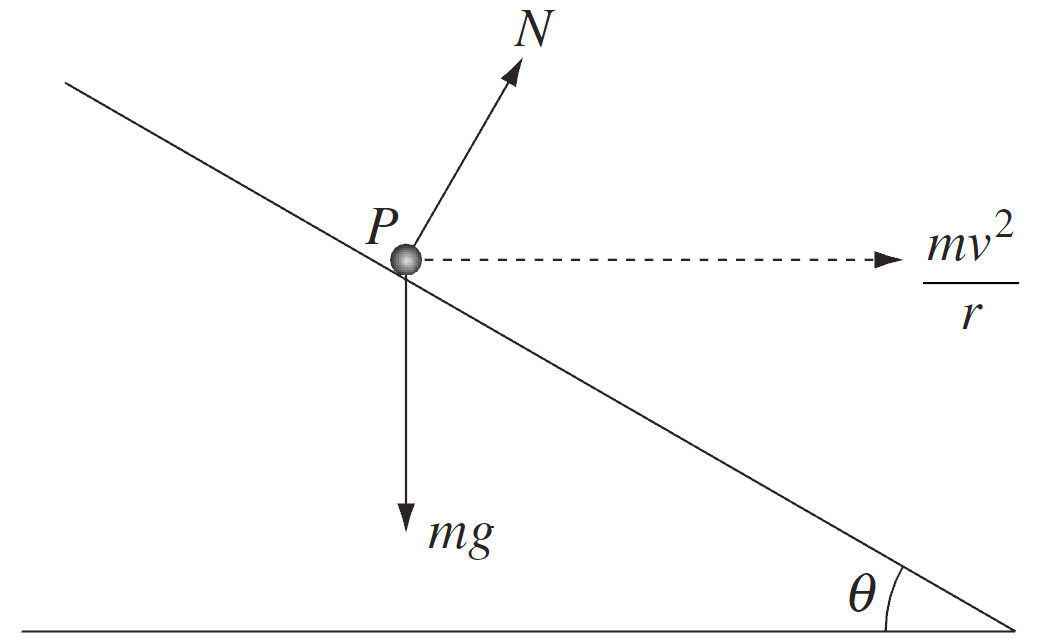 The diagram shows the forces acting on a point

which is moving on a frictionless banked circular track. The point

and is moving in a horizontal circle of radius

. The track is inclined at an angle

to the horizontal. The point experiences a normal reaction force

from the track and a vertical force of magnitude

due to gravity, so that the net force on the particle is a force of magnitude

directed towards the centre of the horizontal circle.

in the horizontal and vertical directions, show that

Using a triangle, we see that:

Substituting this into the above we have:

. Around the bend the highway is banked at an angle

A car is travelling around the bend at a constant speed

. Assume that the car is represented by a point

. The forces acting on the car are a lateral force

and a normal reaction

to the road, as shown in the diagram.

(i) By resolving forces, show that

(ii) Find an expression for

such that the lateral force