In this section we shall be studying two of the four non-degenerate conic sections. A conic section is essentially the graph obtained upon slicing a double ended cone with an infinite plane. Observe the below diagram; 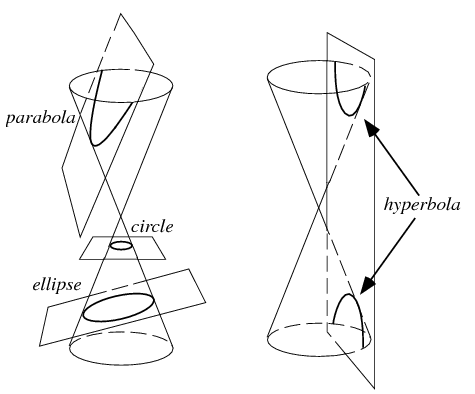 Students should notice that the differing conics all have differing angles to the slant of the cones sides. This is the factor that determines what shape a conic section.

The four degenerate conic sections are; the parabola, the circle, the ellipse and the hyperbola. Students should already be familiar with the first of the two degenerate conics from the Mathematics course. The last of the two conics will be studied throughout this course.

determines the curve of the conic section. The above definition of a conic is called the focus-directrix definition, as it involves the foci and directrices in its definition. This is an important definition and must be committed to memory (verbatim).

Cartesian Equations of the ellipse and hyperbola

We shall now study the Cartesian representation of the hyperbola and the ellipse.

The ellipse that is most frequently studied in this course has Cartesian equation;

. This form of the ellipse has a graph as shown below. 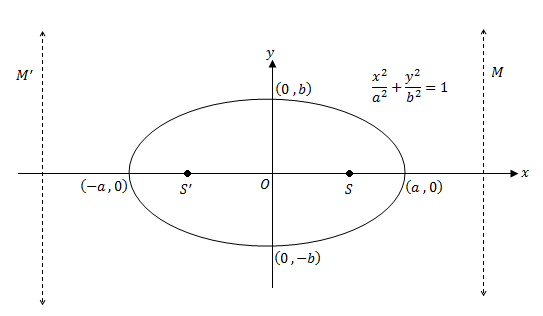 are the two foci of the conic section. The lines marked

are the directrices of the conic. Firstly, some notes on the anatomy of the ellipse. The larger axis of symmetry is dubbed the “major axis” (the line connecting

, for the ellipse. The formulae defining the eccentricity, foci and directrices are given below for this form of the ellipse.

The above formulae must be memorised.

The hyperbola that is most frequently studied in this course has the Cartesian equation;

. This form of the hyperbola can be depicted graphically as; 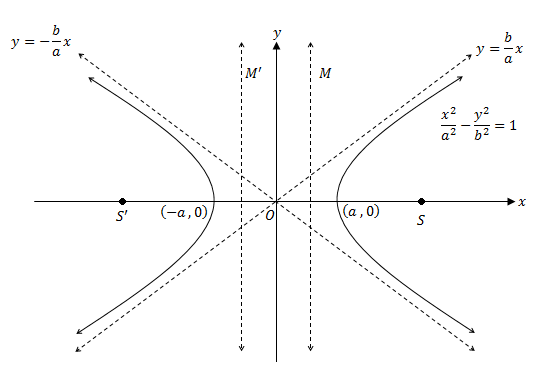 As before, the points marked

are the foci of the conic section, with

representing the directrices. The hyperbola also has another special feature; namely, the existence of asymptotes. As

and these become the oblique asymptotes of the graph. Notice here that the directrices occur closer to the

-axis than the foci do in this case. We shall now study why this is so.

of the hyperbola is bounded below by

and unbounded above. That is the eccentricity of a hyperbola is given by

. After observing the formulae for the directrices and foci below, it can be seen that in this case the foci have a larger modulus than do the directrices, since we have that

The above formulae must be memorised.

Note: Although not specifically required by the syllabus, it is interesting to note that the circle has an eccentricity of

and that the parabola has an eccentricity of

We shall now look at example questions, looking at drawing graphs of these conic sections.

Note: There also exist other forms of the hyperbola and ellipse. The most commonly encountered other form is the ellipse of the form

, and the hyperbola of the form

. These are each a rotation of the ellipse and hyperbola shown before, by latex]90deg[/latex] in the counter clockwise direction. We shall not study these as they are very rarely encountered in questions. E.g. no HSC question since the introduction of the new four unit syllabus has asked about conics of the other form. It is sufficient to know the mechanics of the most common form only. For a study of these forms however, see “Cambridge four Unit Mathematics – Conics” by Graham and Denise Arnold.

Parametric Equations of the Ellipse and Hyperbola

The ellipse with Cartesian equation

has the parametric representation:

That is, the point

lying on the ellipse

is the value of the parameter at that certain point.

The parametric equations of the hyperbola

At this point, some texts encourage the learning of the equation of the general chord to the hyperbola and ellipse using the parametric representation. However, due to its absence in examination and assessment questions, we shall leave this. If students are interested in seeing a derivation and the equations that form from them, see “Cambridge Four Unit Mathematics – Conics” by Graham and Denise Arnold.

We shall now look at some simple examples illustrating use of the parametric form.

The Tangent, Normal and Chord of Contact to the Ellipse and Hyperbola

The equations of the tangents and normals are not required to be memorised, since most (if not every) question will either ask the student to find any equation to be used or give the student the required equation. If this is not the case, derivation of the equations is quite simple, and consequently remembering the equations is superfluous and not recommended. However, we do recommend that students become familiar with the equations by deriving them as much as possible.

We shall simply list the parametric form and Cartesian form of the required equations.

Note: The derivation of these is quite simple, and students should make it an exercise to find these. A note on differentiating the equations of ellipses and hyperbolas though; differentiate implicitly (recall from the topic graphs) and then simply rearrange to obtain an expression in terms of

. After this simply substitute the point into the expression for the first derivative to obtain the gradient at that point. This technique is shown in examples below.

to a curve, is simply the line connecting the two points of contact of the two tangents drawn from the point

to the curve. Observe the diagram below. 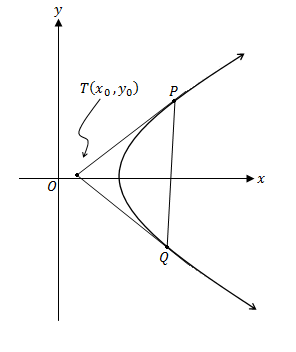 In this diagram, the chord of contact from the external point

Geometrical Properties of the Hyperbola and Ellipse

Note: The above proof fuses together algebraic geometry and Euclidean geometry. At times this is the easiest option. Be aware that it can be easier than the alternative use of pure algebra.

Below is another property required by the syllabus. In this proof we shall investigate the proof or a hyperbola, although it should be noted that there exists a corresponding proof for the ellipse.

We shall now look at a further examination style question.

Note: Locus problems involving the ellipse and non-rectangular hyperbolae are not included in the syllabus.

. Hence we have that the rectangular hyperbola has equation of the form

. Also, due to the fact that

, we thus have that the asymptotes are

. Here is the proof;

for the rectangular hyperbola. Hence we have that

which is the required result.

and continue on from there.

. To obtain this form of the rectangular hyperbola, we translate the axes, or in other words, we rotate the curve by

in a counter clockwise direction so that the asymptotes become the coordinate axes.

is multiplied by the complex number

, the resultant complex number is of the form

. We may use this technique to great effect to show that the hyperbola

converts to the hyperbola

We are performing the following transformation;

be the complex number to which

is transformed to (consequently, the coordinates to which

is transformed to are

Expanding out the RHS gives,

to obtain a new equation that

satisfy, we must multiply the expressions for

and hence we have that

Now, we may obtain the equations of the directrices and coordinates of the foci by performing similar rotations on each component. We shall not show this, but the results are shown in the table below.

The asymptotes now, are obviously

Parameterisation of the Rectangular Hyperbola

The Tangent, Normal, Chord and Chord of Contact to the Rectangular Hyperbola

We shall now study the equations of the tangent, normal and chord of contact to the rectangular hyperbola. Again, as for the ellipse and hyperbola, you are not required to memorise every formula, instead it is recommended you become familiar with them by solving problems.

Geometrical Properties of the Rectangular Hyperbola

We shall now examine some examination style questions, showing the questions that may be encountered with this topic. Note that there are again two particular properties required by the syllabus, and we shall answer these as example questions.

These are problems in which the locus (algebraic description of the geometrical path) of a point is required given a certain condition. In these problems, one typically eliminates the parameters using an algebraic method of elimination. It is important to note that some questions involve restrictions on the locus of the point. Example 15 is a fine show of this. We shall consider some examples to illustrate the techniques involved.