At times it is useful to express two related variables, such as

These equations are called parametric equations, and

is called a parameter. Indeed, this technique becomes increasingly important upon studying the algebraic representation of vectors.

It is particularly useful to express the equation of the parabola

in terms of two parametric equations. These equations are

. By the simple elimination of

we obtain the general Cartesian equation expressed above. The parabola and its parametric equations form the focus of this topic.

As mentioned above, the parametric equations of the parabola

indicates whether or not the parabola is concave up or down. If

then it follows that the parabola is concave up, and if

then it follows that the parabola is concave down. Also, as a side note

, the absolute value of the value of

Converting From Parametric Form to Cartesian form and vice versa

It is quite simple to express a parabola in parametric form. To do so simply find the corresponding value of

or the parabola with equation

and then substitute into the equations,

To convert a parabola from a set of parametric equations to a Cartesian equation, simply eliminate the value of

by simple substitution. For example, to obtain the Cartesian equation of the parabola with parametric equations

We would simply perform the following algebraic manipulations,

Below is an example which illustrates the process of converting from Cartesian form to parametric form.

Here is an example where the parametric equations are converted into a single Cartesian equation.

Here is a slightly more difficult question that requires some thought.

We shall now investigate the equations of the chord, tangent and normal to the parabola

It should be noted that, upon studying this topic students should feel comfortable with all the derivation processes of the tangents, normals and chords in both parametric and Cartesian form. It is not particularly important to remember the equations of each of these, rather, it is important that the student be able to realise the relationships between the differing anatomical features of the parabola.

lying on the parabola

is dubbed the Parametric form of the tangent.

The Cartesian equation of the tangent at the point

on the parabola is

The Cartesian equation of the normal at the point

The equation of the chord between the points

Now, suppose that the chord is a focal chord. That is, the chord passes through the focus

of the parabola. Then we have that

It is also obvious that if

passes through the focus

. This fact becomes important later on.

from the external point

. Consider the diagram below. Here,

To show that a point

is external to the parabola, we simply substitute the point into the equation 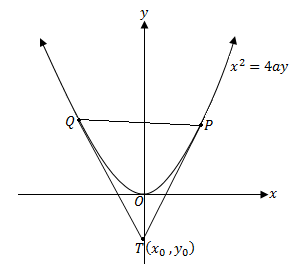 The equation of the chord of contact from the external point

The equation of the chord of contact from the external point

We shall now consider some examples.

Important Geometrical Properties of the Parabola

In this section we consider two important geometrical properties of the parabola. These properties are of immense importance and are required knowledge by the HSC Mathematics Extension 1 syllabus. We shall prove the properties by considering them as examples.

A common mistake with this proof is that students often attempt to prove the result purely through algebra using gradients. This is not only tedious and time consuming, but is also many times more difficult than the proof presented in these notes. Students should note that at times a purely algebraic proof is not the best, and if possible geometry should be introduced to simplify the process. The HSC Mathematics Extension courses are about the interplay between geometry, algebra, arithmetic and calculus. Thus a good understanding of these courses and their subtopics, requires the ability to apply each and every one of these aspects when required.

The two properties already investigated are important, and may be directly examined. However to ensure a complete understanding of the techniques involved we shall investigate some more examples.

Locus problems relating to the Parabola

The locus of a point

plane) is the geometrical path traced out by that point. The result is a set of points which form an algebraic equation. In this section we aim to obtain appropriate loci, given certain conditions by eliminating the parameter as required, to obtain an equation in terms

and only (this is called the “Cartesian equation”). Although the process may sound complicated, it is in fact quite straightforward. Consider the examples below, which illustrate the methods involved in these questions.

A note should be made about the very common mistake of trying to eliminate the parameters without using the information given. Many students will try to find expressions for

by solving simultaneously. Do not fall into this common pitfall. This method is cumbersome and frivolous, as it leads nowhere. Always use the extra information given in the question.