Mathematics Extension 1 – Applications of Calculus to the Real World

Applications of Calculus to the Physical World

At this point we have learnt quite a bit about calculus, and wish to apply it to the physical world. This topic allows one to see the power of calculus in describing real life situations, and is the topic which shows the “applications of maths” so to say. We shall investigate a variety of topics including rates of change, growth and decay, Newton’s law of cooling, velocity and acceleration as a function of

To be able to solve problems in this section, recall the chain rule that states,

is the “dummy variable”. Notice how the

’s cancel. We shall now consider an example to illustrate the type of questions being asked in this section.

The next example introduces a question which is more difficult than the questions shown so far.

We have so far exclusively used the chain rule to calculate rates of change. We shall now employ a technique taught in Mathematics Extension 2 called implicit differentiation, which considers every variable within the expression as a function of the expression to be differentiated with respect to.

The method of implicit differentiation although tricky at first, is more efficient than using the chain rule only.

We shall now further investigate the concept of natural growth and decay. Recall the differential equation

is a real constant (some number determining the growth rate). This equation is a crude model for population growth and is extensively used in the Mathematics course. Recall that the solution to this differential equation is given by,

is some real constant.

In the Mathematics Extension 1 course we shall study the differential equation,

are constants. This equation also describes growth and decay but also takes into account the difference from a certain threshold. The solution to this differential equation is given by,

is yet again a constant. The proof of this is relatively simple.

Taking the reciprocal of all variables on LHS and RHS gives,

Integrating with respect to

is a constant. Now, rearranging gives,

. Hence we have that,

Which is the solution to the differential equation. The initial conditions given will allow the values of

We shall now go through an example to illustrate the type of question that may be asked.

An important application of the differential equation

is to measure the rate at which an object cools or heats up under natural conditions. Letting

represent the temperature in degrees Celsius we have that

is the surrounding temperature, and

In the above example we could have assigned

to be 6 minutes after the object had started cooling. This would allow for easy calculation of the values of

We shall now study the mathematical representation of velocity and acceleration. Velocity is the quantity which, put loosely, describes how fast an object is moving in a certain direction. Acceleration is the rate of change of this quantity. Both these quantities are “vector” quantities in that they have a magnitude (in the case of velocity how fast an object is moving) and they also have a direction.

be the displacement (vector representation of distance) from the point

, which we shall call the origin from here on in. We have that the (instantaneous) velocity

Since acceleration is defined to be the rate of change of the velocity of an object, then it follows that the acceleration

. The main notations used for acceleration are

. We shall look at an example to illustrate the type of question that may be asked.

The proof is quite simple. We firstly note that;

, and when the integral is to be taken with respect to displacement

. Observe the example below.

A projectile is any object whose path of motion (known as the trajectory) is only influenced by gravity; a good example would be a thrown rock. The motion of an ideal projectile is a parabola, although in reality there is a slight deviation from a parabola owing to the air resistance encountered (this is studied in some depth in the Mathematics Extension 2 course). The motion of a projectile may be broken up into two separate and independent motions. This notion of separating the motion of a projectile into two independent motions is important, and allows for the representation of the Cartesian equation of the parabola in terms of two parametric equations that are in terms of time. We shall now study these.

Firstly, note that we represent the motion of a projectile on a set of Cartesian axes and use the origin

Now, we may resolve the motion of the projectile into two perpendicular motions. Consider a particle projected at

m/s at an angle of 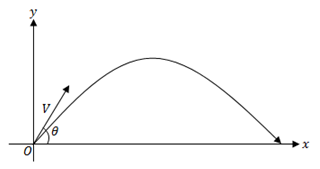 We may draw the following vector diagram with the arrow representing the velocity vector.

Now it is obvious that that

by using simple trigonometric ratios. Now, in the

direction since the only force acting on the object is gravity (recall that forces and accelerations are in proportion to one another). Finding the equations for the acceleration using the

notation mentioned beforehand, we have that;

Now, we shall define

to be at the point of projection. Upon integrating with respect to

and using the initial conditions, we obtain the equations,

These two equations are in essence parametric equations with

(time) as the parameter. We may eliminate

, then substitute into the equation for

. We then have that,

To calculate the range (the horizontal distance travelled) by projectile, we simply find the value of

and substitute this into the expression for

takes its maximum value when

because this sinusoidal factor alternates between

for any value of

. (When the vertical velocity is equal to zero, the particle reaches its maximum height). After finding the value of

, simply substitute the value of

into the formula for

to obtain the maximum height.

Now, some questions may ask the student to find the velocity of the projectile upon impact or at any time

. To do so, simply substitute the value of

into the expressions for

and using the exact opposite process used above, combine the two component vectors into one resultant vector. Doing so gives the speed as

. Now, one must also find the angle of deviation from the horizontal. Drawing an accurate diagram, and considering the angle

as drawn in the diagram, we can show using simple trigonometry that,

and hence that the angle of deviation is

and hence we have that the angle is below the horizontal).

We shall now consider some examples of projectile motion questions.

Objects that undergo simple harmonic motion oscillate back and forth about some equilibrium position. Examples include;

is a positive real constant. We now let

for the sake of simplifying later work. So we have the equation;

is a constant called the amplitude.

is a constant called the angular frequency.

We now look at some important formulae regarding simple harmonic motion.

The period of oscillation

(or just period) is the time taken for one complete oscillation or cycle. This is given by,

The frequency is the number of oscillations per second and is measured in Hertz (Hz). The frequency

. However to obtain a time independentexpression for the velocity, we simple use the formula,

is the position. Proof of this is left to the student.

The definition of simple harmonic motion expressed mathematically is

To prove that a particle is moving in simple harmonic motion we simply prove the above.

That is; A particle moving with an acceleration proportional to the distance from the origin (equilibrium position), directed towards the origin is said to be moving with simple harmonic motion.

The position of the particle at a time

We shall now consider some examples to illustrate questions that may involve simple harmonic motion.