Definition: A radian is the size of the angle subtended at the centre of a circle by an arc of length equal to the radius of the circle. This situation is depicted on the diagram below. 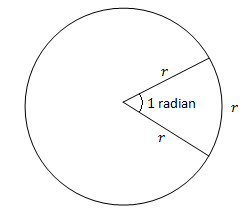 Now, to measure the number of radians in one revolution

we simply measure the number of radius lengths within the circumference of the circle. To do so we have,

as the number of radius lengths within the circumference of the circle.

. Hence we have that,

The following common angle conversions should be known by heart.

To convert other angles, we simply form an equation using ratios. It should be obvious that the ratio of any angle in radians over

is equal to the ratio of that angle in degrees over

. From this, the unknown is left as some pronumerals and the resultant equation is solved to obtain the required value. Consider the below example to illustrate the conversion of angles.

Note: When degrees are intended, the degree sign is included. For radians, at times the angle measure is followed by the word “rad”, but most of the time an angle in radians is left without any units following after.

Note: The reason for the use of the radian angle of measure is because functions such as

do not make physical sense when the domain is in degrees. Also, the degree unit of measure is based on the angle subtended by the Earth at the sun after one day (the sun is the centre of the circle made by the Earth’s orbit). Obviously mathematics is universal and is not to be restricted only to our solar system, hence making radians a more universal angle measure and more suitable for mathematics.

Within a circle of radius

we have that the following formulae are true. 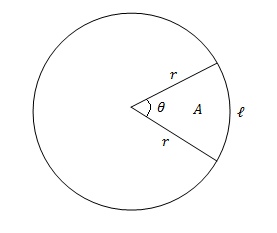 is measured in radians. 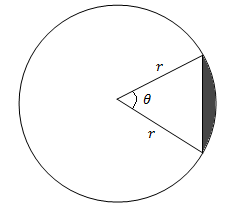 minus the area of the isosceles triangle subtended within the sector. That is,

Since we have that the isosceles triangle has two sides, each of length  about an angle of size

radians. Hence we have that the area of the minor segment is given by the formula:

is measured in radians. Be sure to convert your calculator into radian mode to ensure that the correct value of

Graphs of the basic Trigonometric Functions

You should be familiar with the graphs of the trigonometric functions

with the measure of the angle being the degree. We shall now investigate these graphs, using radians as our angle measure. Recall that the trigonometric functions are periodic, which implies that for a function

. We firstly note that the period of a function is the value of

in the above identity. That is, it is simply the difference between functional values that results in the functional values repeating themselves. Also, the amplitude of a periodic function is the maximum value of  for all

within the domain. Below every curve is a description of the most important facts relating to it.

This curve has zeros at the values

is an integer. The period of revolution is

. The amplitude of the curve is

This curve has zeros at

is an integer. The period of revolution is

. The amplitude of the curve is 1. 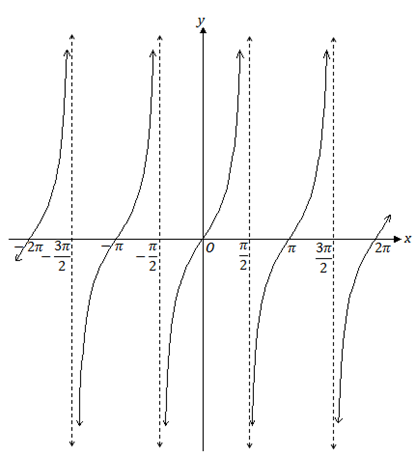 The curve has zeros at

is an integer. The curve has asymptotes at

is an integer. The period of the function is 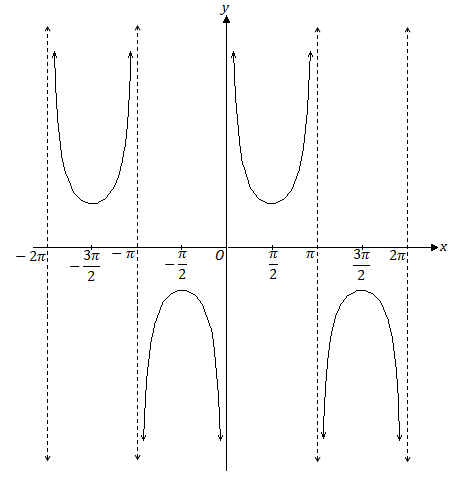 The curve has no zeros. The period of the curve is

. The curve has asymptotes at 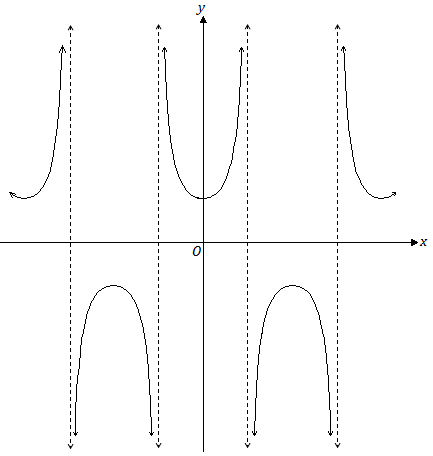 The curve has no zeros. The period of the curve is

The zeros of the curve occur at

is an integer. The asymptotes occur at

is integral. The period of the function is

The Advanced Mathematics syllabus may also ask students to sketch variations (translations and stretches) of the two main trigonometric graphs;

In general for the curve

is translated to the point

. The amplitude of the curve is

and the period of the curve is

In general for the curve

is translated to the point

and the origin is converted to the point

. As before the amplitude of the curve is

and the period curve is

These facts should be memorised. There are also other methods of sketching trigonometric curves (such as plotting points) which may complement the methods taught here.

Note: Almost all questions involving sketching will indicate the domain to be sketched.

Consider the below examples that show utilisation of these formulae.

Note: It is very easy to become confused when solving questions involving trigonometric functions. To help with the sketching of the curve, plotting a few easy points helps. In the above case, noting the

will help with sketching the curve.

The next example illustrates the use of the formulae related to the cosine function.

We shall now study the differential calculus of the trigonometric functions. We shall not show the first principles derivation of these differentials; rather we shall present them for the student to memorise. The reason for not showing a derivation is due to the requirement of several results outside the scope of the advanced mathematics course.

The three results shown here must be memorised. The differentials of the other trigonometric functions may be obtained using the chain rule and quotient rules.

Applying the chain rule to the above differentials gives the following results.

We shall now apply these results to some example questions.

As exhibited in the above example, all the rules that previously applied for differentiation still apply for differentiation (i.e. the chain rule, the product rule, the quotient rule). You also must be able to use the derivative to find gradients and equations of tangents and normals and also maxima and minima.

As differentiation is the reverse process of integration, we can simply derive the integrals of the trigonometric functions by applying the fundamental theorem of calculus. The following results should be committed to memory.

The following three rules are given in the HSC Mathematics Standard Integrals table. These do not have to be committed to memory.

Now, the more general forms of these rules are;

All formulae for finding volumes, areas and definite integrals apply to the trigonometric functions as well. We shall now investigate some examples of such questions.