is called the locus of the point

. In this topic we shall study the loci involving the parabola, circles and straight lines.

Typically, problems involving loci are stated as “Find the locus of the point

that moves such that a certain condition is obeyed”. The question is simply asking for the algebraic equation (Cartesian equation) that describes the geometrical path followed by the point that obeys that condition.

is always 3 units to the left of the

We draw a diagram to illustrate the path followed by 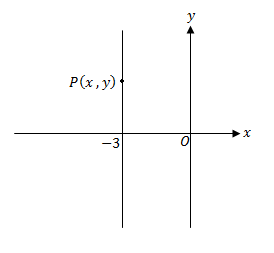 Now, if the point

is at all times

units to the left of the

-axis, then all the points

units to the left form the locus. That is, the locus is

is equidistant from the axes.

We firstly draw a diagram. 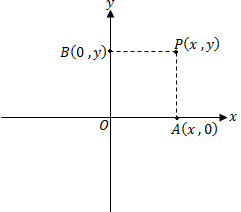 Now, we have that

is at all times equidistant from the coordinate axes.

So, using the distance formula we obtain,

Upon squaring both sides.

Thus the locus of the point

. (Of course this simplifies down to

which is equal to

Note: This technique of squaring both sides is particularly important within this topic. Be sure to understand the use of it, and any particular intricacies it may have. A particular difficulty posed to students is when there is a coefficient placed in front of the square root implying use of the index law

. Most students however, forget to raise the

to the power of

Find the locus of the point

that is equidistant from the points

. We draw a diagram to depict the situation pictorially; 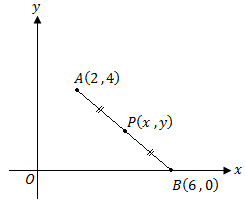 The condition that must be satisfied is,

Hence the locus of the point

Note: Locus questions such as the one above can be particularly tricky, and if the distances between the point

are not equidistant, then the locus will be a circle instead. We shall see an example of this later on throughout the notes.

A circle is defined to be the set of all points

is equidistant from a point, say

is called the center of the circle and the distance between

is called the radius.

and the distance between A and P is r. We can formulate the general equation of a circle (this should already be known) by simply using the definition stated above.

So we have that, the distance of the point

from the point A is at all times equal to r. That is,

Now, squaring both sides of the expression gives;

. Now suppose that the centre of the circle is at the origin. That is

. Hence we have that the equation of the circle with centre

We shall now consider some examples to illustrate use of the formulae.

. There is no need to expand the squares. The reasoning behind this is that the centre and the radius may be readily found by observing the equation left in the desired form. Any expanded equation will require extra work to find the centre and radius.

Consider the diagram above. This diagram depicts the most basic form of the parabola, and it is this case which we shall derive. However, other parabolas are derived from first principles using very similar techniques.

, since we have that

must be equal to the perpendicular distance of the vertex from directrix.

is the foot of the perpendicular from

to the directrix. So we have by the definition of the locus of a parabola that,

Now, using the perpendicular distance formulae and some very simple coordinate geometry we can see that,

Now, it is obvious that

, since we have that

since it is equal to the

-coordinate of the point

since we have that

lies on the line

which is the simplest form of the parabola. You need not use the first principles method to derive the equation of a parabola, unless of course it is stated clearly in the question.

Note: The absolute value of

is called the focal length of the parabola, as it is the distance between the vertex and the focus. It is also the distance between the vertex and directrix. From this we can deduce that the vertex is the midpoint of the perpendicular from the directrix to the focus. You need not use the first principles method to derive the equation of a parabola, unless of course it is stated clearly in the question.

We shall now investigate the general equation of the four mainly encountered parabolas. Below are diagrams with the corresponding equation and position of the vertex. In each case the vertex has coordinates

, the focus is designated

and the directrix is indicated by a dotted line. It should be noted that the four formulae introduced here for the four differing types of parabolas must be committed to memory (verbatim). 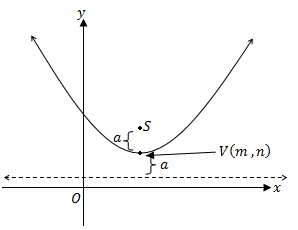 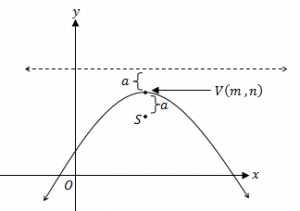 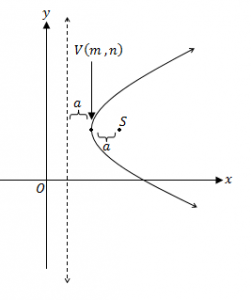 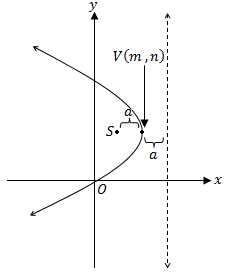 To solve problems involving the focus and directrix of a certain parabola, simply sketch the required parabola (a good diagram is a prerequisite) and then simply rearrange the Cartesian equation to obtain one of the four general forms. After this simply read off the focal length and then find the focus and the directrix by simply regarding the concavity of the curve.

We shall now consider some examples requiring use of the formulas above and the first principles definition of the parabola.