The index notation is used to simplify what would normally be very long notation. The expression

Has the value of

multiplyed by it self

These should be familiar. From these four laws we may extrapolate a few extra rules (or theorems) to ease our mathematical work.

The most general form of the exponential function is

is a constant. We shall now investigate the graphs of exponential functions.

For the general function

the graph of the function has a general shape given below. But firstly we should consider asymptotic behaviour and any possible intercepts. As

and there does not exist

. Also, the domain of the function is all real

and the range is all positive real values of

. Hence we can obtain the graph, 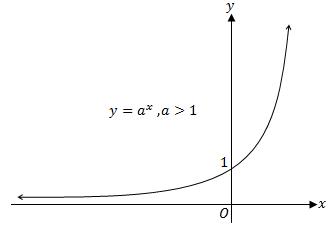 Observe the steepness of the curve for

. This is due to the rapid growth of the exponential function.

Now, the graph of

is similar, but of course is a reflection of the graph above about the

-axis resulting in the graph; 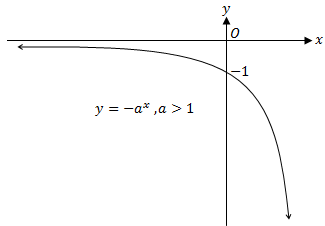 Now by using similar techniques to those used in drawing

, one can draw any variation of these exponential functions with ease. We shall consider some examples to illustrate the notions here.

Differential calculus of the exponential function

The differential calculus of the exponential function is quite straightforward. However, before delving into the calculus aspect, a new number must be introduced. The natural base

, is an irrational number approximately equal to

. This number is the most important and frequently used base in mathematics. The reason why this number is so incredibly important is obvious in the below formulae.

So, to illustrate the importance of

we consider the derivative of

This function has the remarkable property that its derivative is equal to itself! This is why

. Now, to generalise the above rule we have that,

in a later chapter.

We shall now study some examples to illustrate the process of finding derivatives. Note that all the previous differentiation rules (product rule, quotient rule, chain rule) all apply.

The process of finding tangents, normals, minima, maxima and points of inflexion all still apply as before. You must be able to use the derivative effectively to obtain the required results throughout the questions. Consider the below examples which illustrate the use of the derivative.

Integral Calculus of the Exponential Function

Since integration is the exact reverse process of differentiation, then it follows that we can integrate exponential functions according to the following rules;

We shall now look at some examples illustrating the types of questions involved. Note that all the previous taught rules relating to integration still apply, and that the new taught rules only apply to finding the anti-derivative of the exponential function.

Note: You must take care when rearranging the

expression to obtain an integral involving exponential functions. You can only rearrange constants, to obtain the

A logarithm is another name for an index. It tells us how one number can be written as a power of another number. Mathematically, if we have that

Then it follows that

is the logarithm of

. Hence we have that if;

Note: Your calculator has two buttons for calculating logarithm; log and ln. The first button calculates logarithms to the base ten, which were important before the advent of modern calculators, but aren’t used very frequently now. The second button is more commonly used and is the logarithm in base . The importance of this logarithm relates to the calculus of the logarithmic functions.

Note: The notation used for logarithms at times becomes quite confusing. Throughout this text and most others

, will indicate the natural logarithm (logarithm base

will also indicate the natural logarithm, and

will indicate the logarithm taken with the base ten.

As there are index laws for exponential functions, there also exist logarithm laws for logarithmic functions. These laws are very similar to the index laws. They are listed below, and must be committed to memory.

These laws may be proven using the index laws, however we shall leave those to the discretion of the student. Consider the below examples to illustrate the use of these laws.

There are three extra theorems which are of extreme importance when dealing with the logarithmic function. We shall not look at examples involving these, however it is of the utmost importance that students remember them.

The logarithmic function is of the form

is a constant greater that

. The most commonly encountered logarithmic function is

. Before we investigate the graphs, it should be noted that the domain of the function is

. A graph of this function is shown below. 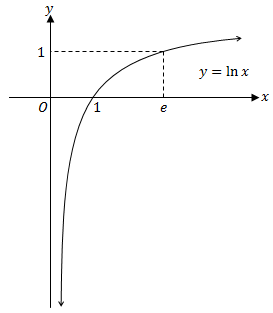 It can be seen that as

, albeit rather slowly. The rate of growth of the logarithmic function is very slow, and attributed to the value of its derivative. This is why the function seems to flatten out but in fact is still growing indefinitely, just at a rate that is quite slow.

The below graph is a graph of the function 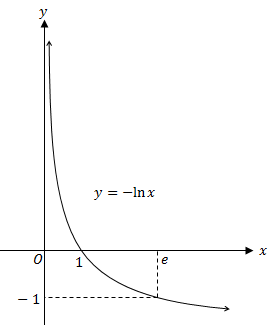 It can be seen that all other forms of the logarithmic function may be graphed by some form of a shift, stretch or flip.

Note: Students commonly lose marks by not making their logarithmic graphs taper off as

gets large. To ensure that maximum marks are obtained, ensure that the graph is growing at a very slow rate as

The Differential Calculus of the Logarithmic Function

The derivative of the Logarithmic function solves a very tedious problem formed when calculus was developed. What function has derivative equal to

? This question turns out to be answered by the function

. The derivation of the differential will not be shown, instead we shall simply show the derivatives and students should remember these results.

and in general we have that;

. Other bases will be dealt with in a later section.

Consider the below examples which illustrate differentiation of the logarithmic function. Note that the previous rules obtained, still apply in this case (product rules, quotient rules and chain rules).

We shall now look at some exam style questions involving the differential calculus. Note that all previous methods apply to finding tangents, normals, maxima and minima.

The Integral Calculus of the Logarithmic Function

By use of the fundamental theorem of calculus we have the results;

and the more general result;

We shall illustrate use of these results in the example below.

We shall now consider some exam style questions involving integration. Note that all previous formulae still apply for the logarithmic function as well.

To differentiate and integrate expressions involving other bases, we simply use the exponential inverse rule, or the change of base rule that was presented before. These rules allow for the base to be changed to that of

and hence allow for the integral or differential to be evaluated. That is,

And we have that,

Using these rules, we are then able to differentiate and integrate these functions.