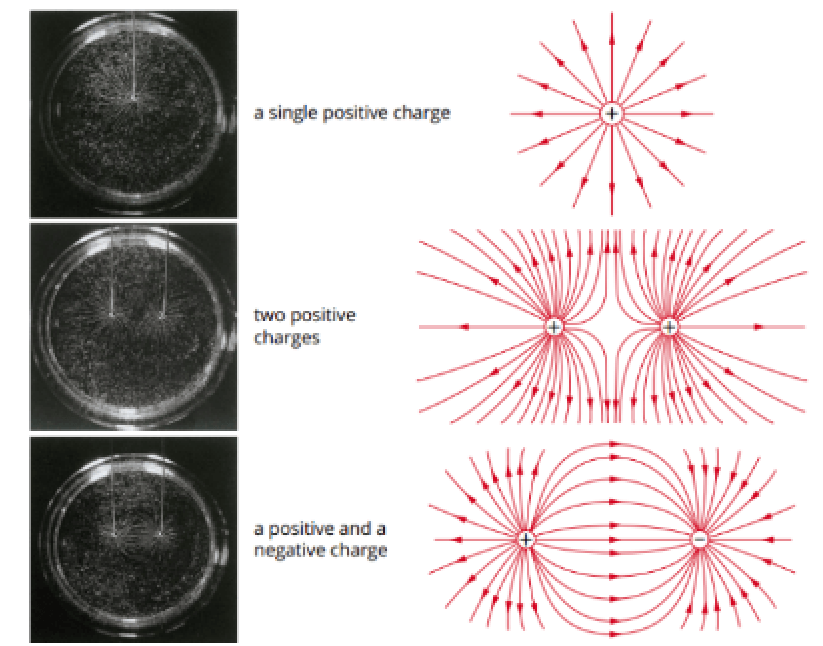 Acceleration of a charged particle by the electric field

Combining this equation with Newton’s will allow us to find the acceleration of a charged particle in an electric field.

The electric field produced by two parallel charged plates can be visualised as follows: 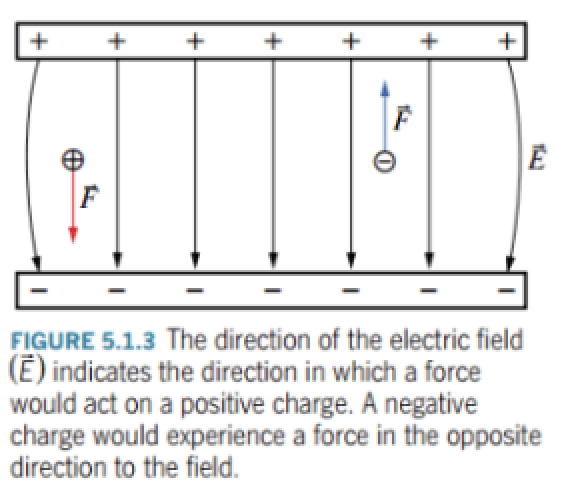 There is an electric potential (V) which exists between these two charged plates. This is commonly measured in volts. The difference in potential between the two plates is also known as the potential difference. 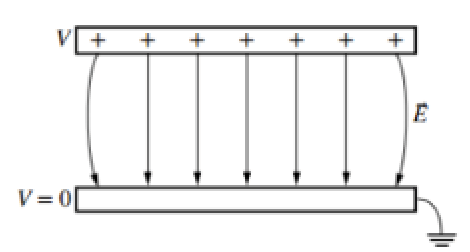 The electric field strength can be calculated as follows:
Using the above equation and combined with what we already know we can then find the acceleration of a charged particle.

Work done on the charge 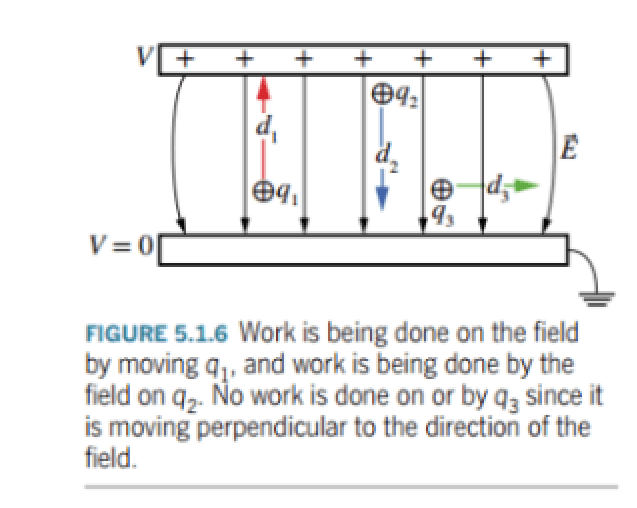 In both electric fields and gravitational fields, the fields exert a non-contact force on objects with particular characteristics.

In both uniform electric fields and gravitational fields, the field strength is constant and the direction of acceleration is always in one direction.

The similarities between gravitational and electric fields means we can use all of our equations of motion from Advanced Mechanics to perform calculations on the movement of charged particles in electric fields. 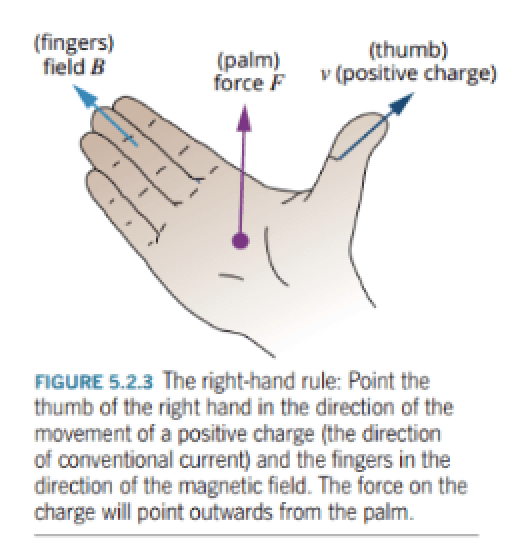 The magnitude of the force acting on the charged particle is given by:

The convention for drawing magnetic field lines is: 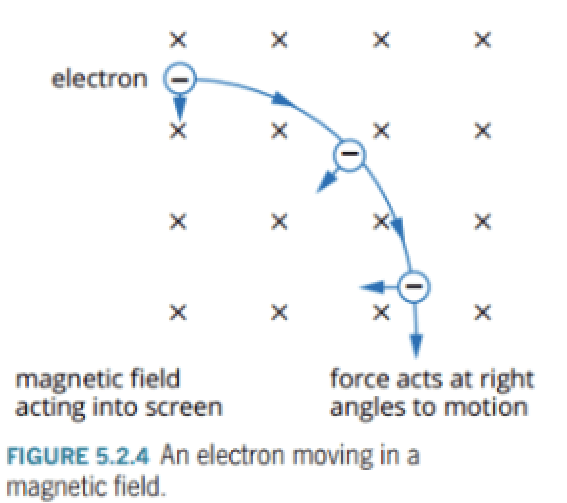 Note that the charged particle will only continue to move in uniform circular motion so long as the charged particle remains inside the magnetic field.
Once we have deduced that the particle undergoes uniform circular motion, we can use our formulas from Advanced Mechanics to calculate other quantities related to the moving particle such as its speed and the relationship between the radius of the circular trajectory and the magnetic field strength.
Equating and will give:

The magnitude of the force is quantified by:

The direction of the force on the wire is determined by the right hand palm rule:

For direction of force on negative charges, simply reverse direction of conventional current and apply right hand palm rule.
A force exists for a current-carrying wire because the magnetic field of the wire interacts with the external magnetic field such that one side cancels while the other side add constructively. Thus, a force results due to imbalance in magnetic fields.

Each current-carrying conductor will produce its own magnetic field. The direction of this magnetic field can be determined by the right-hand grip rule.

Alternatively the quantity k can be given by:

Magnetic flux – the amount of magnetic field passing through a given area.

Strength of a magnetic field depends on density of magnetic flux.
Therefore it can be seen that flux can change if we vary the angle between the magnetic field and the area of the plane.

Lenz’s law tells us that:

The technique to applying Lenz’s law is always:

Transformers – devices that increase or decrease the size of the AC voltage as it passes through them.
Simplest transformers consist of:

Soft iron core magnifies magnetic flux by temporarily aligning its domains with external magnetic field, becoming a temporary ferromagnet that has its own magnetic field which adds to the magnetic flux. (partial magnetisation)
Transformers are dependent on AC because for a current and voltage to be induced in secondary coil, the secondary coil needs to experience a constant magnetic flux change. A Δφ is needed for electromagnetic induction. DC would not induce a current in 2nd loop because φ through secondary coil would remain constant.
Step-up transformers – devices used to increase the voltage of AC electricity.

There are two main formulas associated with transformers:

However, the ideal transformer model makes some assumptions such as no flux leakage and no power loss which are not applicable to real life.
The no flux leakage assumption is violated because it is impossible to fully direct all magnetic flux from one coil to another. 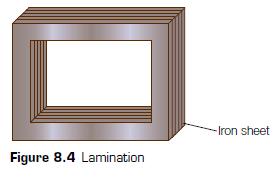 Resistance in coils
Coolants used to cool down wire coils in transformer.

Use of transformers in high-voltage power transmission

Electricity generated by 3-phase AC generator generally has extremely high voltage (23000V) and high current (~10000A).
Electricity is fed into step-up transformer that increases voltage to 330000V and results in decreased current.

After electricity transmitted over large distance, voltage is stepped down by transformers in sub-stations for safety reasons near cities. Current thus increases.
Eventually voltages stepped down to 240V by telegraph pole transformers. Voltage is stepped down gradually after sub-station by local step-down transformers.
When electricity is transmitted through wires, energy is lost mainly in the form of heat.
This is mainly due to resistance of wires. (Note: The thicker the wire, the smaller the resistance).
The power loss is given by . (Note: power is rate of energy loss).
Resistance of wire depends on length and so long distance transmission lines will inevitably have high resistance.
Thus the only way to minimise loss of energy is by changing the current.
Transformers can increase the voltage of electricity and decrease its current as energy is conserved.
This effectively decreases the current without changing power being transmitted.
Since power loss is proportional to the square of the current, it follows that decreasing the current will minimise energy loss.
Thus, transformers make electricity transmission more efficient.

Applications of the Motor Effect

Electric motor – a device that converts electrical energy into mechanical energy usually through rotation.
A DC motor has the following typical structure: 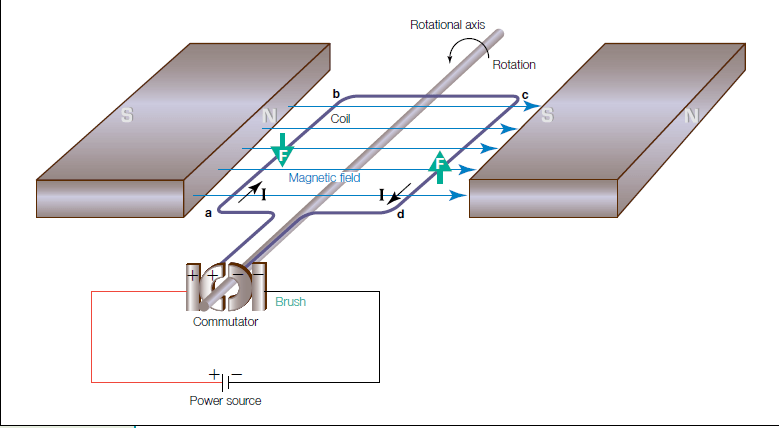 The Motor effect causes a force to be generated on the sides ab and cd of the coil in the above image.
Notice how the forces resulting from the motor effect acting on the sides of the coil form a turning moment with the pivot of the rotational axis.
The torque produced allows the coil to rotate on the axis.
As the coil spins, a small force forms on sides BC and AD which stretches the coil but since the coil is rigid this is not noticeable.
The torque in a motor can be quantified:

Torque is a maximum when coil plane is flat.
Torque slowly decreases as the coil turns because the angle between the coil and magnetic field increases.
Torque is 0 when coil plane is vertical.
At this position, there is no turning effect so the DC motor can no longer spin continuously and coil eventually stops.
Describing changing torque in DC motor:
Initially τ is maximum and LHS/RHS will turn upwards (Using RHP rule).
Τ declines as motor moves through 90o and coil reaches vertical position. Due to its momentum coil will not stop moving and presence of split ring commutator will ensure that it will keep turning in the same direction.
As coil turns, there will also be back EMF as the coil experiences a magnetic flux change. Back EMF will increase as coil speeds up, and it will oppose supply voltage.
This continues until back EMF balances out supply voltage and net current in coil is 0. There is no torque at this point and coil rotates at constant speed.

Main features of a DC Motor

When drawing a “real life” DC motor must have:

The above position of the commutator occurs when maximum torque is experienced.

When the insulator of the commutator is in contact with the carbon brushes, the current through the coils is 0 but inertia will keep it moving so this is not a problem.
Magnetic field
Magnetic fields are required for sustained motor effect to rotate the motor.
Provided by permanent magnets or electromagnets.
This is also known as the stator as the magnet usually remains stationary in the motor.
Permanent magnet

Electric generator – A device that converts mechanical energy to electrical energy using the principle of electromagnetic induction.
A DC Generator is basically a DC motor in reverse.
Most of the components of a generator and motor are largely the same.
Both have armatures and magnets.
Difference in function: 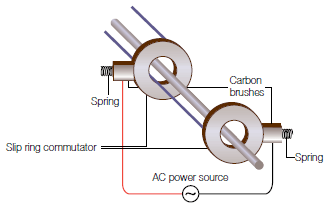 The purpose of the slip ring commutator is to provide constant contact between the internal and external circuit so the induced EMF will be replicated without entangling the circuits. 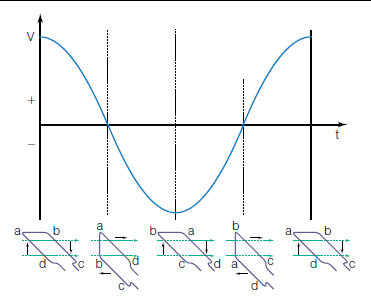 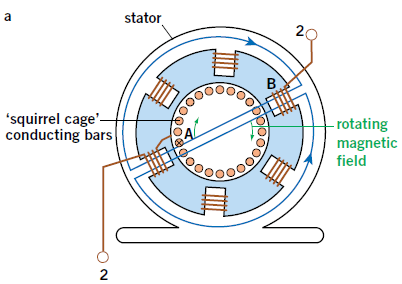 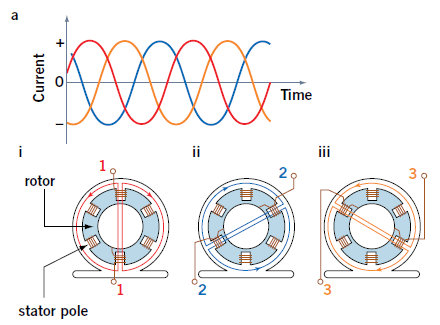 No current is fed into the rotor; it is the induced current of the rotor that interacts with the magnetic field.
Minimal back EMF and eddy currents in squirrel cage as little relative motion between rotor and magnetic field (squirrel cage chases field).
Advantages:

Lenz’s law is basically a restatement of the conservation of energy.
Work cannot be done unless you put in additional energy into the system.
In the context of DC motors, the motor eventually achieves constant rotational velocity due to the existence of back emf.
If you place a load on the motor, you want it to do work on the load. Since the rotational speed of the motor will slow down, the flux change will decrease and the back emf acting against the input emf will decrease. This will ‘free up’ more available emf to increase the motor effect so that the motor can do work on this additional load. However, this will also mean that a larger current will now flow through the coils, thus causing the coil to heat up as there isn’t as much back emf to oppose the input emf as before.

Eddy currents – Loops of current that flow on the plane of solid conductors as a result of induced EMF.
Eddy currents exist via Lenz’s Law to oppose induction.
Only occurs at the area of the conductor where there is a flux change.
Although positive charges don’t move, we are dealing with conventional current in this case.
Notice that eddy currents only occur on the edge of the magnetic field, this is where there is a flux change and not the middle of the metal plate.
The eddy currents are induced such that there is an induced force that opposes the force of the metal plate as a result of the interaction between two magnetic fields.

Strong magnets are lowered next to the train’s wheels to produce a magnetic field to induce eddy currents.
The eddy currents within the wheels oppose the motion of the rotating wheel.
However, the braking effect reduces as the wheel slows because the flux change decreases so the size of the eddy currents decreases.
Thus braking force decreases as the rotation of the wheel decreases.
Kinetic energy is converted to heat energy. (Wheels become very hot)
Hence if the train wishes to stop completely, then it must apply mechanical brakes.
Advantages