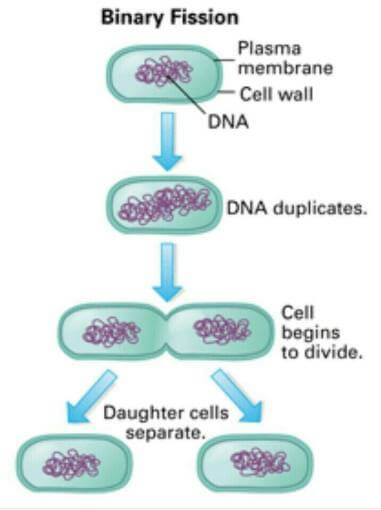 There is unequal division of cytoplasm resulting in the buds being much smaller than the parent.

The bud may remain in contact with the parent cell to form a colony.

The buds may connect with each other to produce a chain of buds. 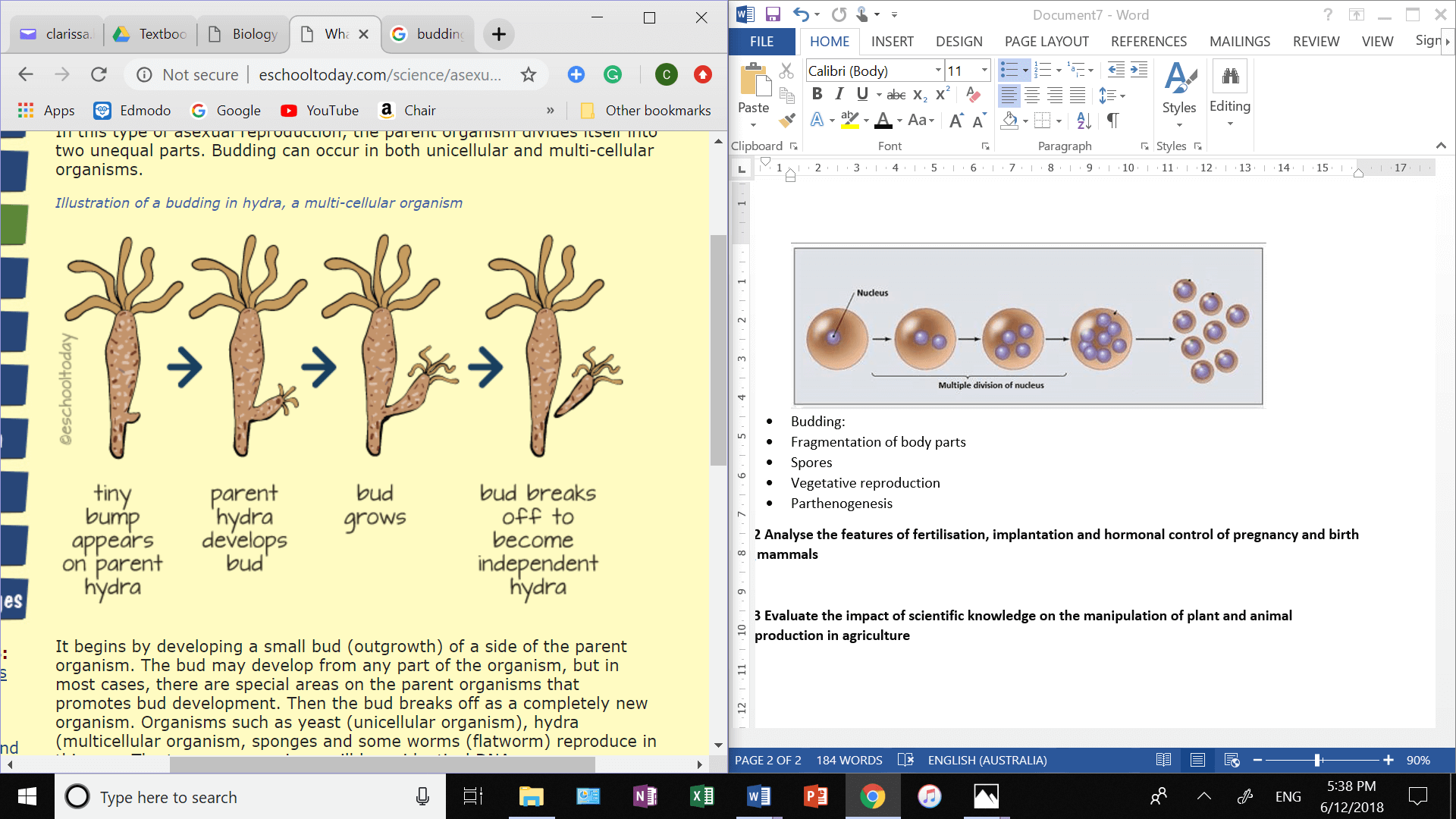 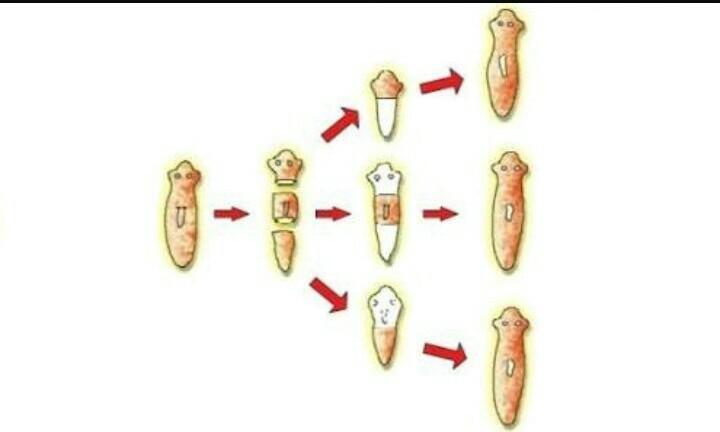 Explain the mechanisms of reproduction that ensure the continuity of a species, by analysing sexual and asexual methods of reproduction in a variety of organisms, including but not limited to: 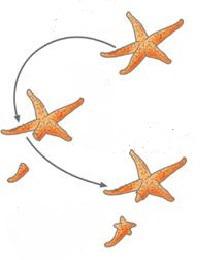 Fission e.g. planaria → growth of a structure on the parent organism which detaches to become a new individual. 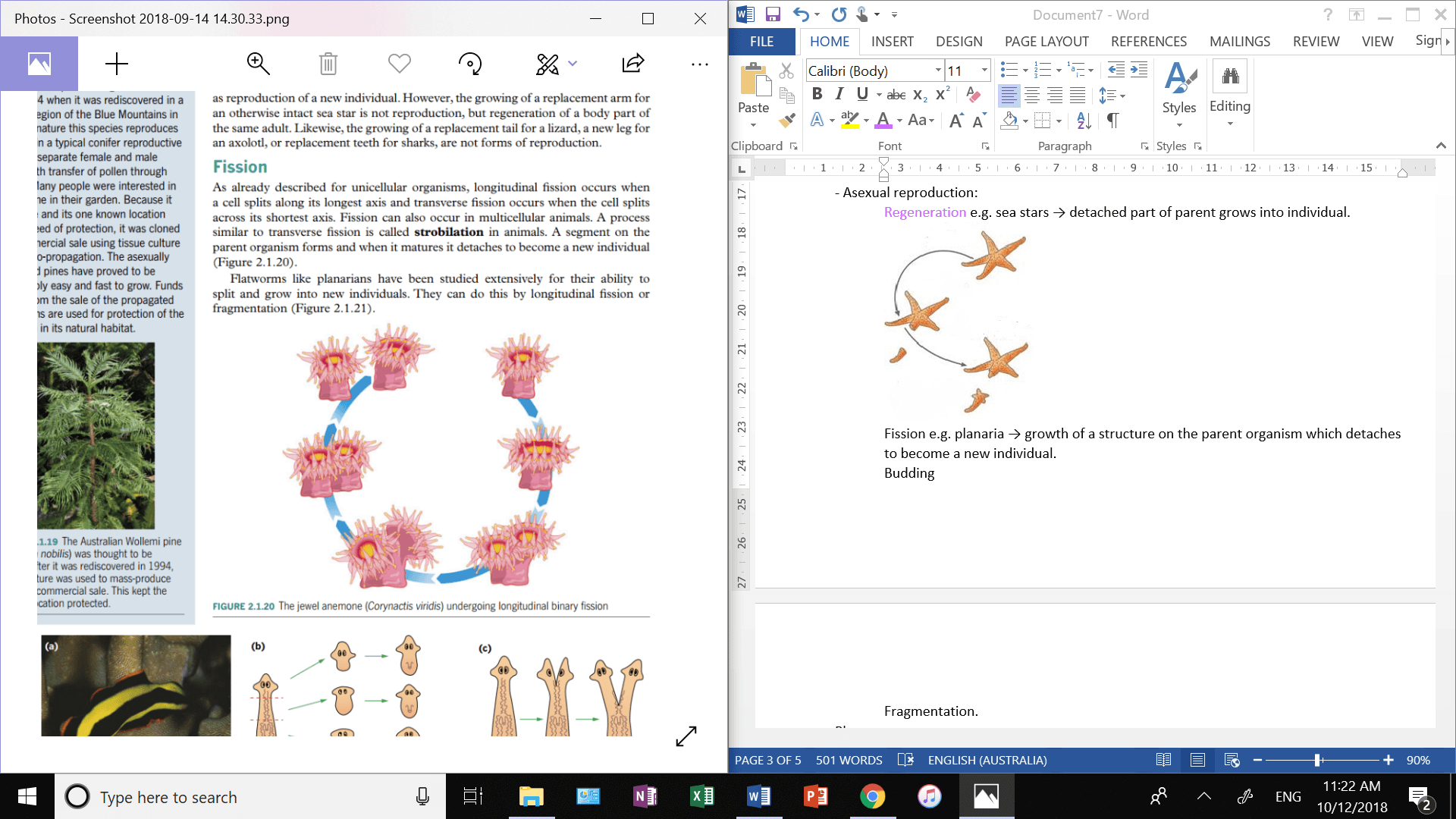 Spores (e.g. mushrooms) can either be

NOTE some reproduce both sexually and asexually e.g. ciliates. They sexually reproduce when variation is needed in a changing environment. 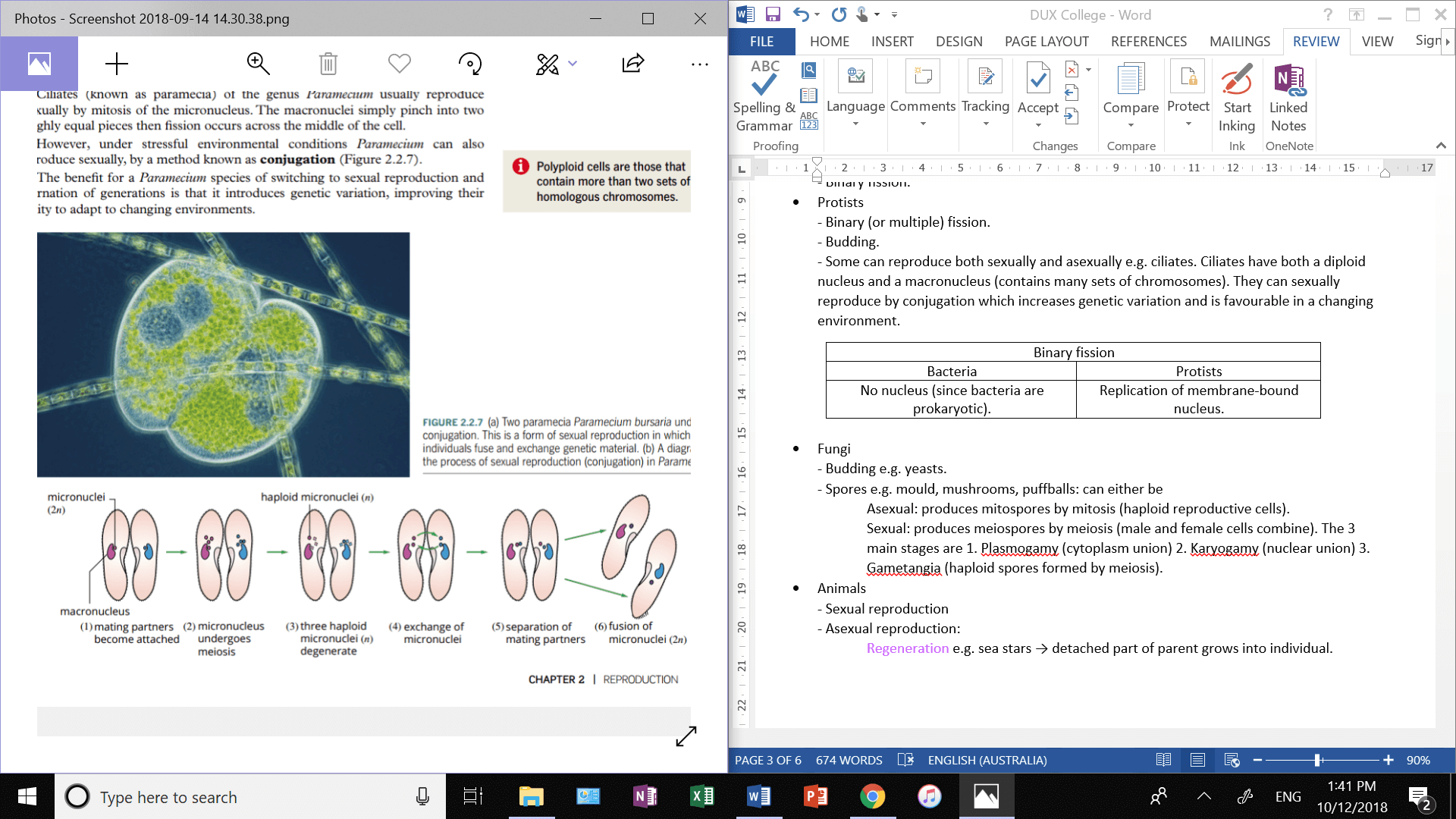 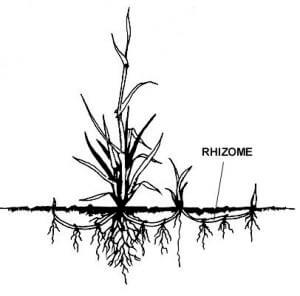 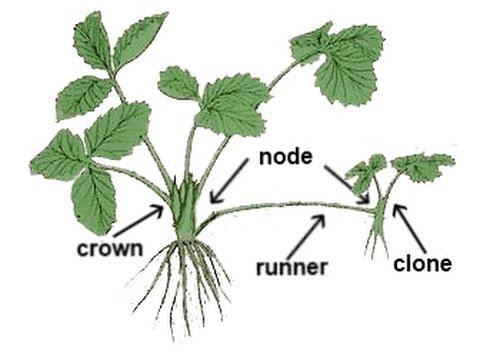 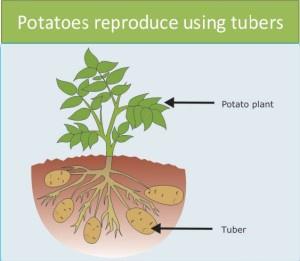 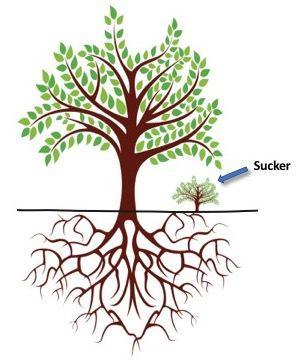 Plants alternate between generations of haploid and diploid stages 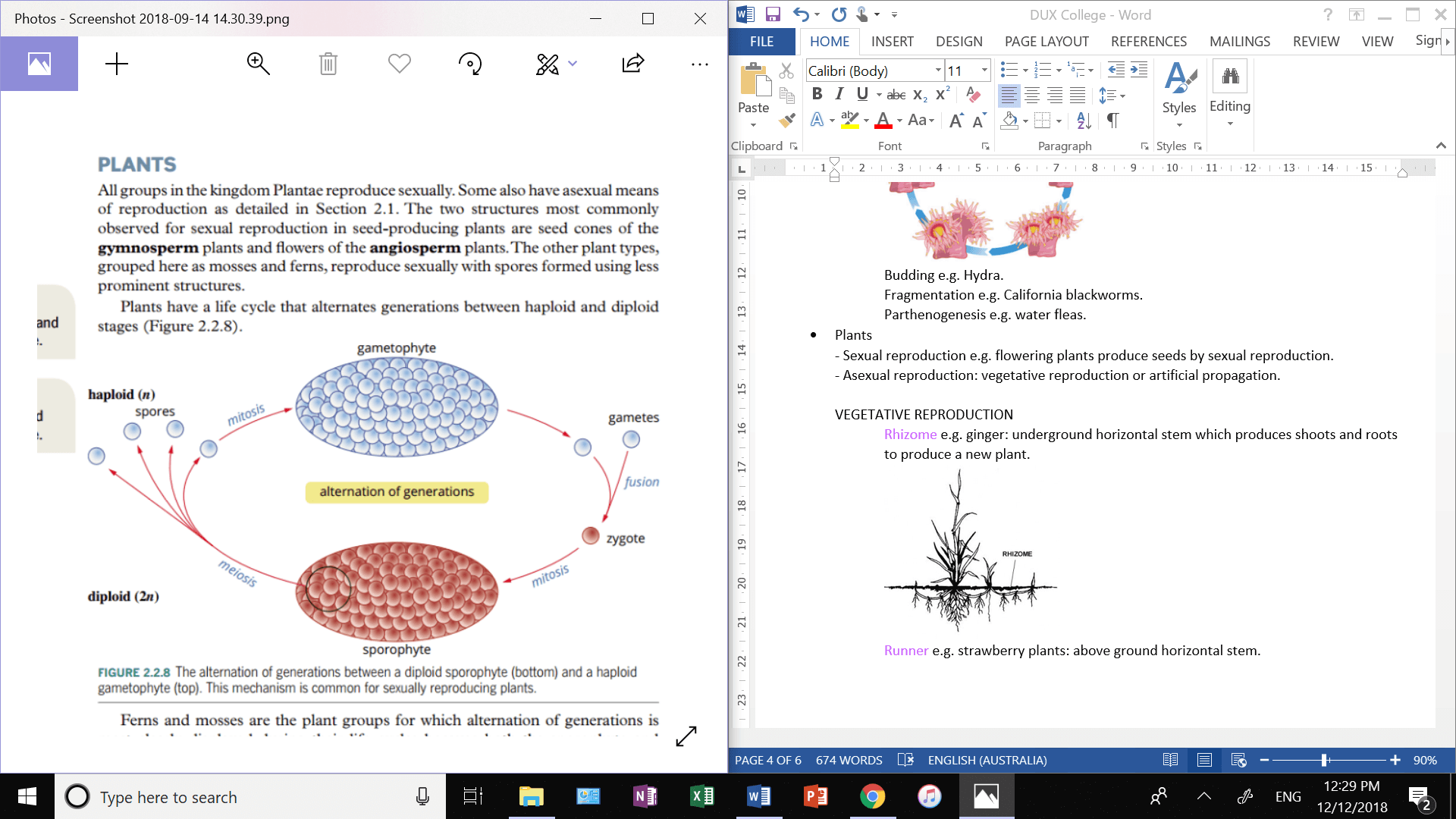 Either the haploid (gametophyte) or diploid (sporophyte) stage dominates in a plant. 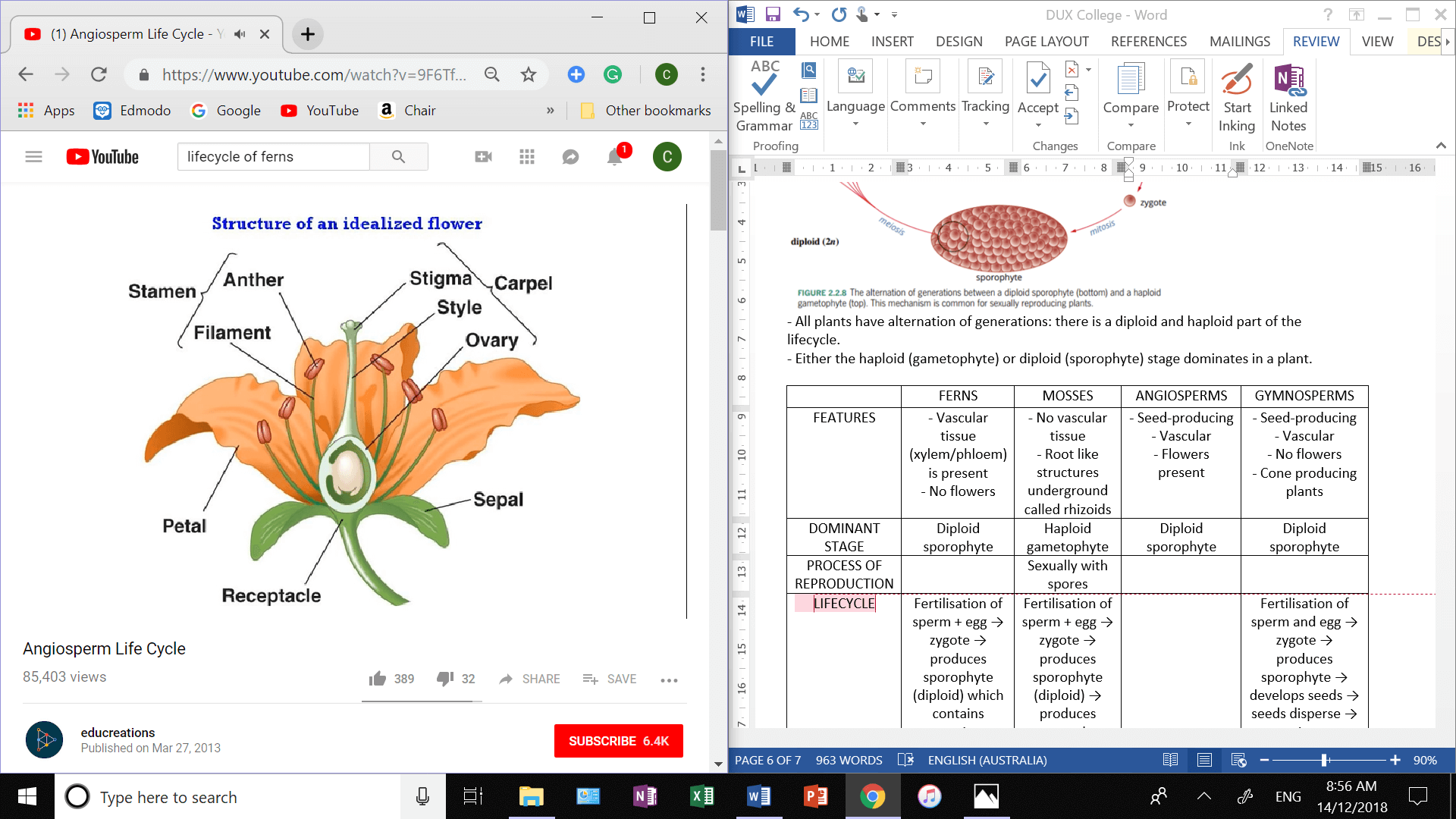 Style: joins the stigma to the ovary.

Analyse the features of fertilisation, implantation and hormonal control of pregnancy and birth in mammals

FERTILISATION: fusing of 2 haploid gametes to produce a diploid cell.

Hormonal Control of Pregnancy and Birth:

Model the processes involved in cell replication, including but not limited to:

Telophase: nuclear membrane reforms around the 2 sets of chromosomes. 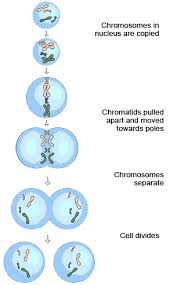 Prophase I: Crossing over of DNA occurs (trade sections of DNA).

Metaphase I: Homologous chromosomes line up at equator.

Anaphase I: Homologous chromosomes are pulled to opposite ends of cell (random assortment).

Telophase I and Cytokinesis: Nuclear membrane forms and cells separate.

Anaphase II: Chromosomes are pulled apart into chromatids to opposite ends of cell. 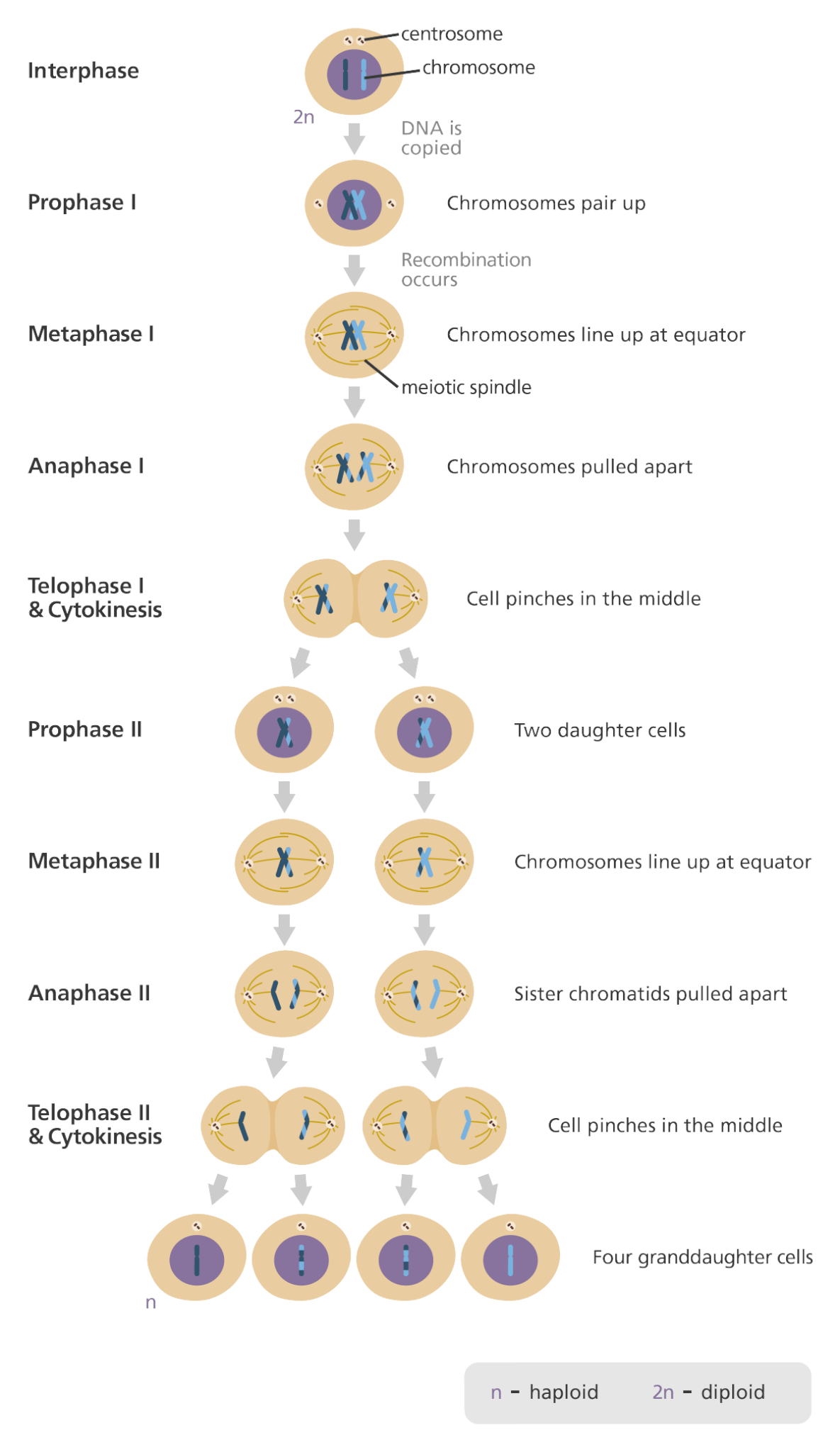 The above Watson and Crick model is,

Bonding and pairing of nucleotides:

i) Replicates parent cells to maintain optimal functioning of an organism.

ii) Introduces genetic variation via mutation → evolution of a species.

Model the process of polypeptide synthesis, including:

3. Termination: Makes strand of mRNA which leaves nucleus into cytoplasm.

1. Initiation: Ribosomes bind to mRNA and produce corresponding tRNA anticodon (has complementary nitrogenous bases to those in mRNA). The anticodon has a specific amino acid.

4. Elongation: As ribosome move along mRNA, more amino acids are attached and linked by peptide bonds.

5. Termination: Stop codon = polypeptide chain released into cytoplasm and either:

Folds to form protein OR

Bonds with other polypeptides and then folds to form protein.

Assessing the importance of mRNA and tRNA in transcription and translation

mRNA (messenger) = carries genetic code outside nucleus into cytoplasm which is read by ribosomes. IMPORTANT FOR TRANSCRIPTION.

tRNA (transfer) = carries amino acids to ribosomes to form polypeptide chain, there is a different type for every amino acid. At the bottom of tRNA is an anti-codon that and at the top there is an amino acid. IMPORTANT FOR TRANSLATION. 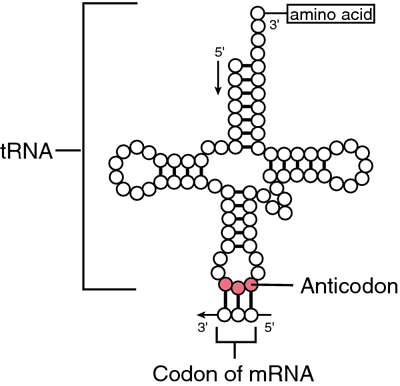 Analysing the function and importance of polypeptide synthesis

For analysing the function/importance of polypeptide synthesis look in 4.3

Both an organism’s Genotype and Enviroment determine phenotype.

E.g. if 1 identical twin is undernourished as a child, they will not be as tall as the other child.

E.g. flower colour in different soils hydrangeas in acidic soil are blue and in neutral/alkaline are pink.

Investigate the structure and function of proteins in living things

Proteins: complex macromolecules made of one or more polypeptides chains.

Secondary structure: folding the polypeptide chain into a specific shape.

PROTEIN STRUCTURE AND FUNCTION CAN BE AFFECTED BY:

Enzymes are held together by strong bonds. 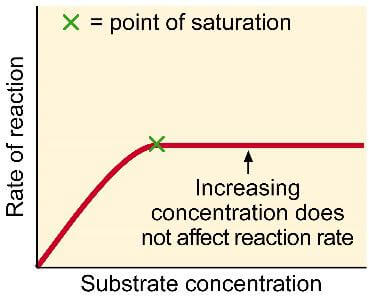 Conduct practical investigations to predict variations in the genotype of offspring by modelling meiosis, including the crossing over of homologous chromosomes, fertilisation and mutations 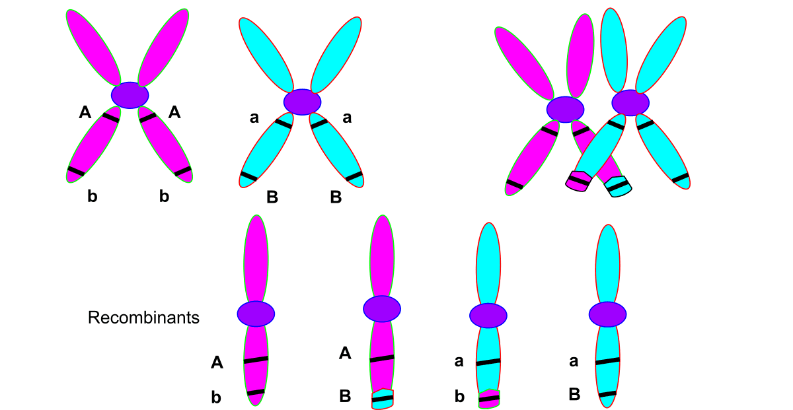 NOTE alleles are alternative forms of genes that determines phenotype.

Model the formation of new combinations of genotypes produced during meiosis, including but not limited to:

Affected males transmit the trait to all daughter and no sons.

Unaffected mothers have unaffected sons.X-linked recessive (sex-linkage)Affected females (homozygous) pass trait to all sons.Co-dominancePair of alleles do not show dominance.

In a heterozygous individual both alleles are expressed as separate, unblended phenotypes.

E.g. AB blood.Incomplete dominancePair of alleles do not show dominance.

In a heterozygous individual both alleles are expressed as blended phenotypes.

Only 2 alleles are present in an individual.

NOTE there are VERY FEW Y-linked traits, however they are possible.

Constructing and interpreting information and data from pedigrees and Punnett squares 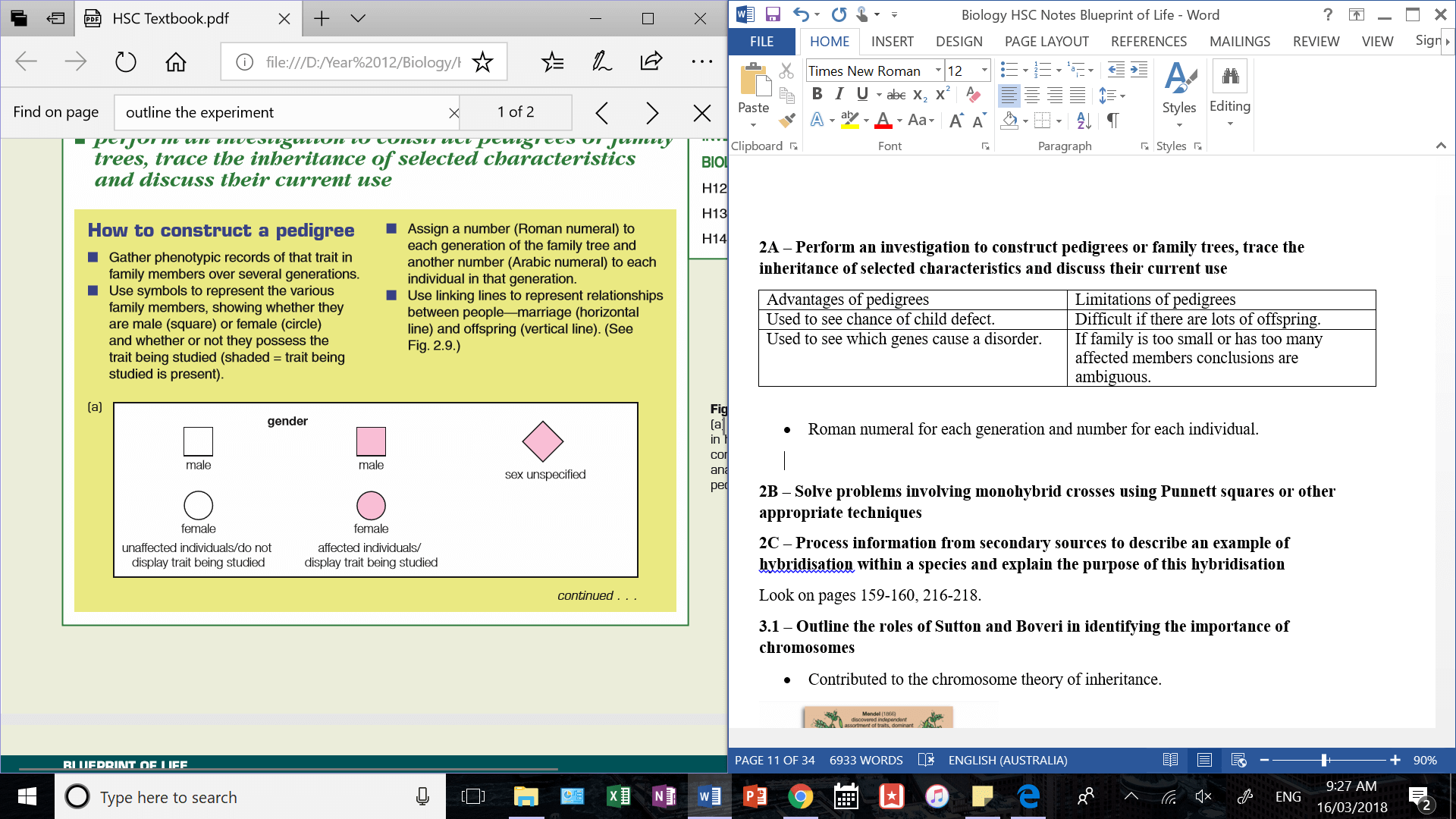 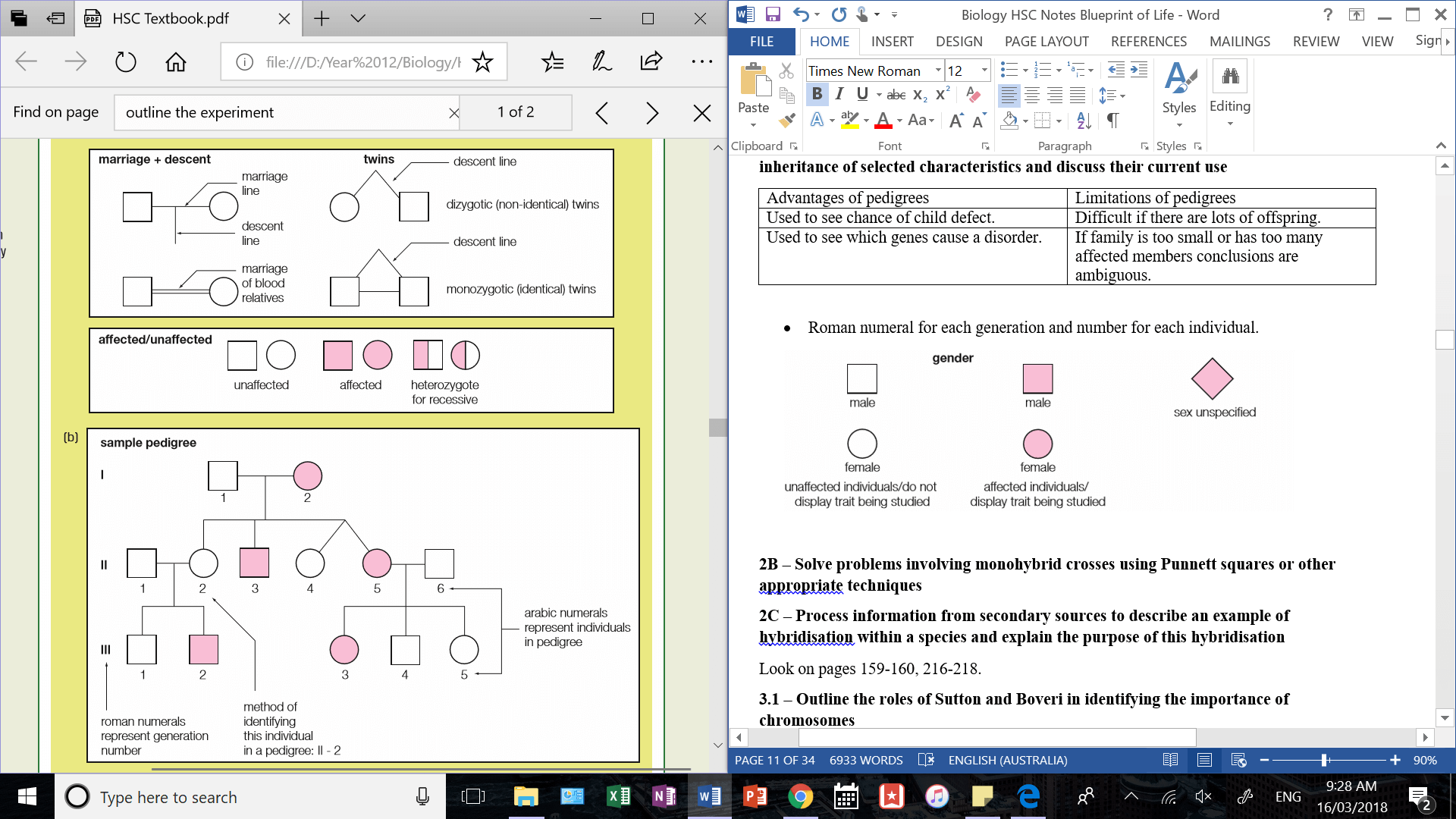 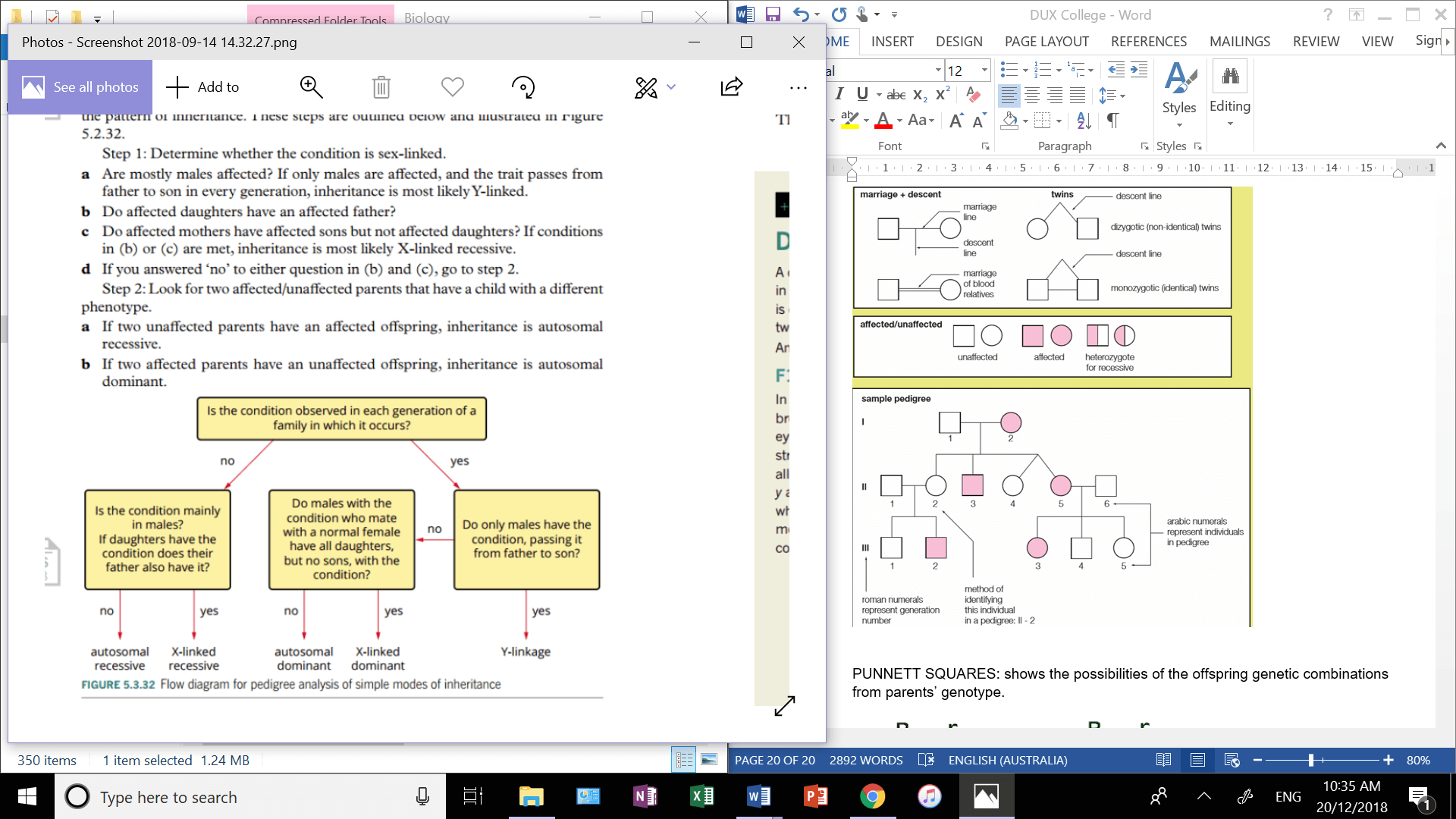 Punnet Squares: shows the possibilities of the offspring genetic combinations from parents’ genotype.

In the above example there is a 3:1 ratio of expression of dominant : recessive traits.

Collect, record and present data to represent frequencies of characteristics in a population, in order to identify trends, patterns, relationships and limitations in data, for example:

Inheritance Patterns in a Population

Investigate the use of technologies to determine inheritance patterns in a population using, for example:

DNA profiling: used to distinguish individuals from each other e.g. identify criminal, identify bodies after disasters.

2. DNA added to primer for each STR (genetic marker).

4. Difference in size of STRs between 2 people is detected by

NOTE genetic markers are pieces of DNA that are analysed.

Investigate the use of data analysis from a large-scale collaborative project to identify trends, patterns and relationships, for example:

Objective: Sequence all 23 chromosome pairs → discover order of nucleotides in DNA and the number of genes in 1 human.

The use of population genetics data in conservation management

Population genetics enables discovery of evolutionary pathways/relationships. It was discovered that: