This is a set of HSC Physics notes for each syllabus dot-point of Ideas to Implementation. HSC Physics tutoring at Dux College provides students with the right support to achieve a band 6 result in HSC Physics.

Increased understandings of Cathode Rays led to the Development of Television

Many experiments were performed by scientists in the late 19th century. These experiments had results which indicated cathode rays were either charged particles or electromagnetic waves.

A number of experiments were used by both groups as evidence and support of the conflicting arguments. Their interpretation was often ambiguous and some findings were used to support both arguments.

An example is the sharp shadows cast from objects in the tube, suggesting the rays travelled in straight lines

*Note: Cathode ray tubes initially had too much gas in them. These gas particles were ionised by the cathode rays and hence moved towards the deflection plates, neutralising them. When the technology was developed to evacuate the tubes more, deflection was observed.

Cathode ray tube: an evacuated tube which allows the unobstructed movement of cathode rays from a cathode to an anode.

Cathode ray: a stream of electrons from the surface of a cathode and accelerated towards anode by a high potential difference 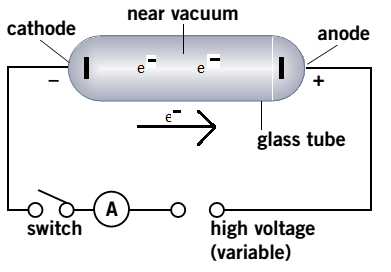 A charge moving through a B-field experiences a force

The force is a vector quantity so the direction can be determined using the R-hand palm rule. 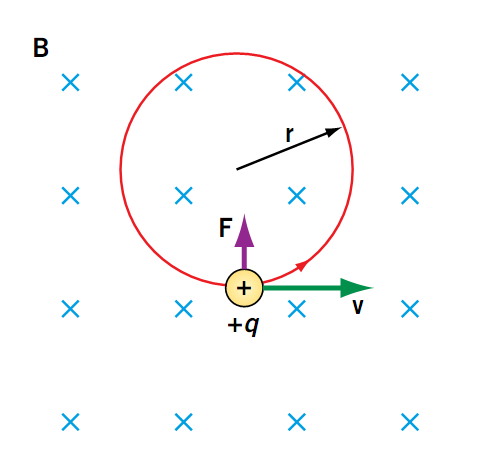 in the cathode ray tube of conventional TV displays and oscilloscopes

Striation patterns refer to light and dark areas inside a discharge tube. Electrons colliding with air particles release light dependant on the energy of the electrons, but also on the amount of gas inside the tube. As the pressure of gases change, so do the striation patterns.

In this experiment, we had 4 discharge tubes each with different pressures: (percentage of atmosphere).

The exact nature of the striation patterns depends on what gas is used (more in Q2Q).

Hertz demonstrated the production of radio waves and confirmed Maxwell’s prediction that there were EM waves with frequencies outside the visible light spectrum.

Hertz wanted to produce EM waves with frequencies and wavelengths other than visible light.

An induction coil was used to create a rapidly oscillating B-field which caused a rapid sparking across a gap between spherical electrodes in a conducting circuit.

Changes in the receiving electrodes were observed 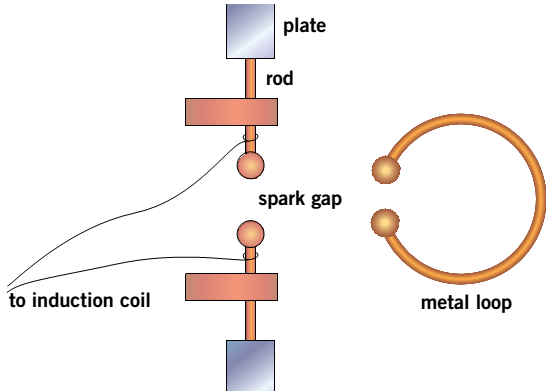 When the power was on, sparking occurred between the electrodes at the transmitter and this also resulted in sparks at the receiver.

These observations strongly supported Maxwell’s prediction of EM radiation and model of light: self-propagating, transverse waves of alternating electric and magnetic fields that are perpendicular to one another. Hertz concluded that radio waves were able to cause sparking at the receiver.

The photo electric effect is the emission of electrons from the surface of a conductor when it is subject to EMR.

This led onto further investigations and observations.

He named these effects the photo electric effect but did not investigate any further.

Hertz’s experiment to measure the speed of radio waves

In order to prove that these radio waves were EM waves, he showed they had similar properties to light, namely its speed.

Measuring the Speed of Radiowaves

Conclusion: Hertz then found the speed of radio waves using 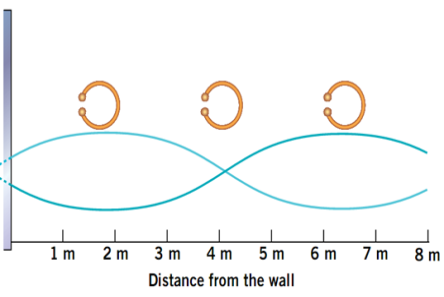 Radiation is emitted and absorbed by a black body radiator in discrete amounts called quanta. Their total energy occurs in multiples of E=hf. .

A black body is an object that absorbs all incoming radiation (none is reflected or passes through). As it gets hotter, it will emit radiation with a wavelength dependent on its temperature. 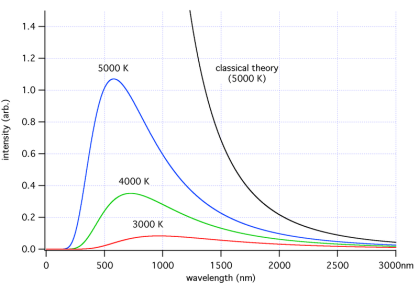 Einstein proposed that EMR is made of concentrated bundles of energy known as photons. 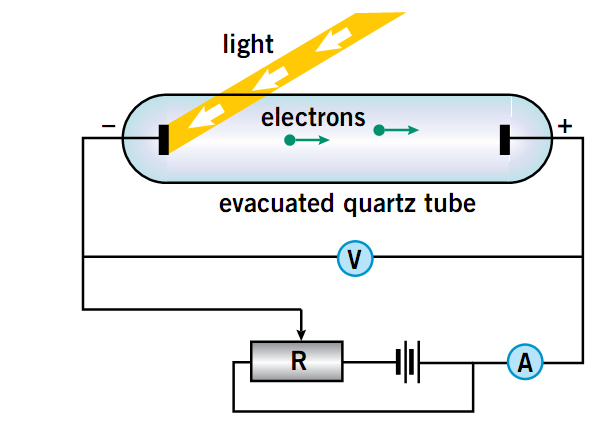 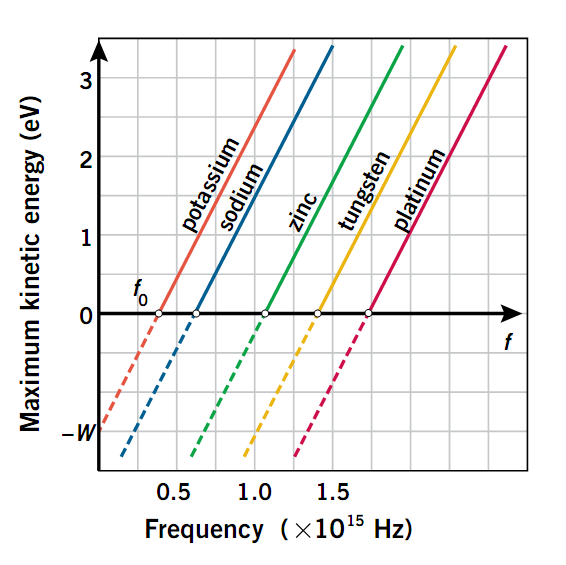 Einstein’s Explanation of the Photoelectric Effect

Classical: Energy of light increases as the intensity of the beam increases.

Experimental: KE of photoelectrons was a function of the frequency of the light and the stopping voltage was independent of light intensity.

Einstein’s theory explains what classical physics could not, lending significant support to quantum theory. The wave and particle properties of light described by Einstein also led to de Broqlie’s hypothesis of the wave-particle duality of matter.

Therefore, Einstein’s predictions were an important step towards the development of Quantum theory.

Light is considered to consist of a stream of particles or discrete bundles of energy called photons. Photons carry an amount of energy that is proportional to the frequency of radiation.

The Photoelectric Effect in Photocells 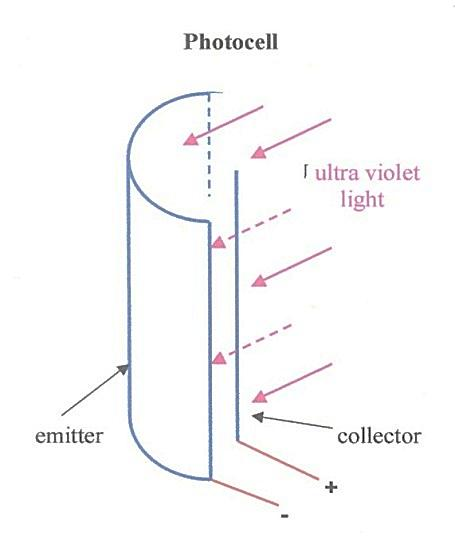 Some electrons in solids are shared between atoms and move freely

In metals, a lattice of positive ions is surrounded by a sea of delocalised valence electrons which are free to move between atoms.

Difference between Conductors, Insulators and Semiconductors

Absence of Electrons as Holes

The net absence of an electron in a full valence band is known as a positive hole.Holes act as positive charge carriers and move in the direction of conventional current. 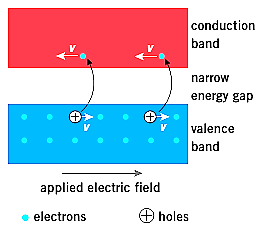 The use of Germanium in Early Transistors

Germanium was the first element to be used in early transistors as it was the only element which could be purified to a sufficiently high level.

Doping is the addition of impurities into a semiconductor to enhance its electrical conductivity. 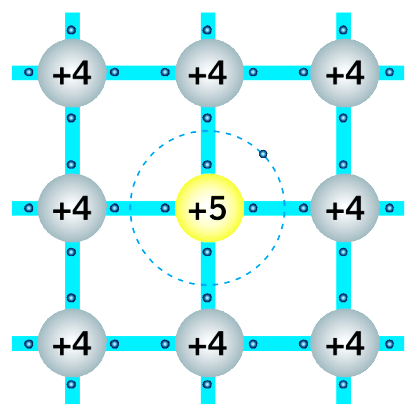 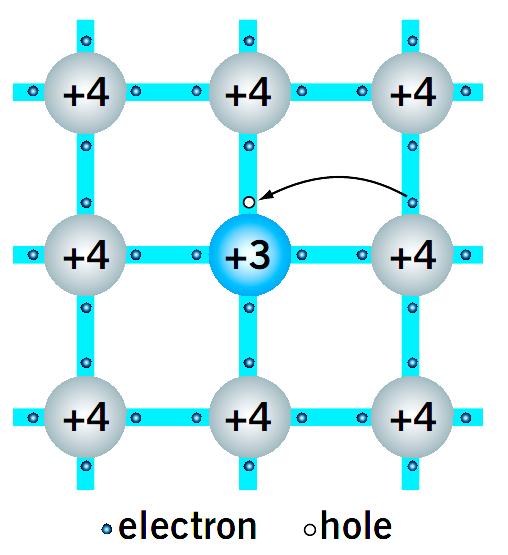 Difference in number of Charge Carriers in P-N type Semiconductors

Thermionic devices use the thermionic emission of electrons to rectify or amplify current. 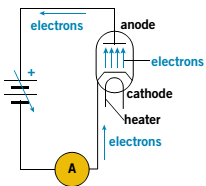 Operation of a p-n junction 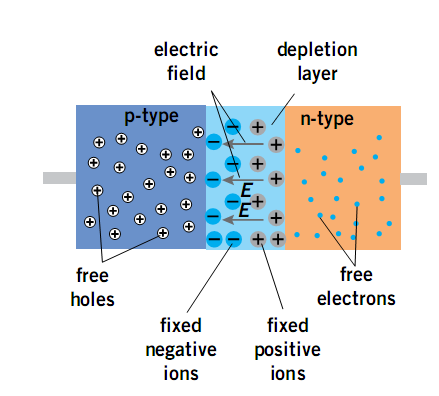 The application of current can be either “forward” or “reverse” biased: 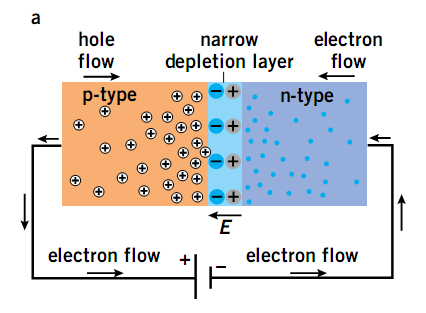 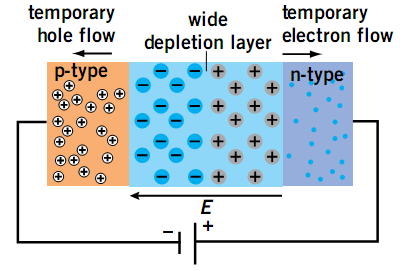 During WWII, the increased need for more efficient and sensitive radar and radio communications sparked research into transistors.

Silicon – this led onto research which enhances our understanding of methods of silicon production, eventually allowing the creation of Si transistors which overcame shortcomings of Ge use.

Transistors in Microchips and Microprocessors

The invention of transistors led to rapid advances in computer based technologies.

Assessment: Overall, use of transistors have improved standard of living for many

Superconductivity and the Exploration of Possible Applications

Braggs proposed that x-rays could diffract off a crystal lattice surface due to their short wavelength.

Metals possess a Crystal Lattice and how Conduction in Metals occur

Resistance in Metals due to Impurities and Scattering

Note: Remember that the electrons always “drift” with negligible net displacement and only when a voltage is applied will they drift in a net direction (towards the positive terminal) 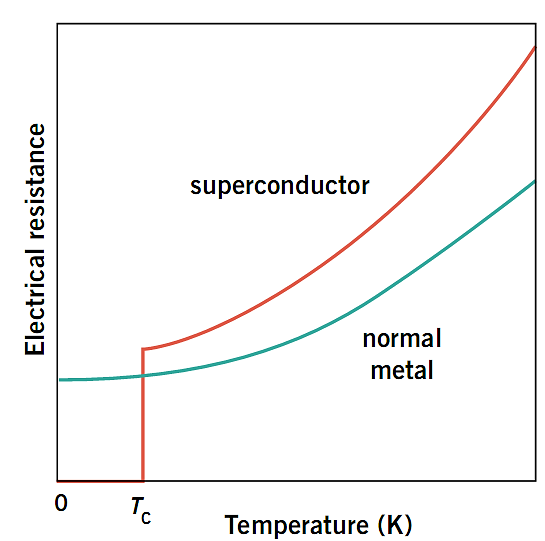 Formation of a Cooper Pair 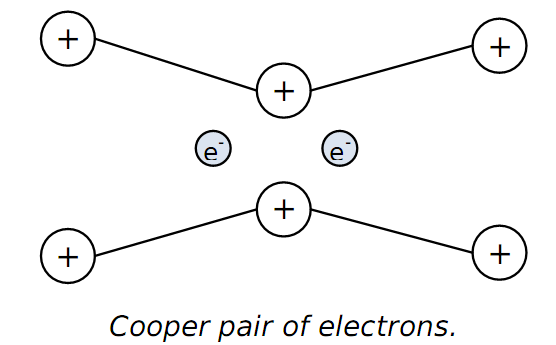 Advantages and Limitations of Superconductors

These properties are particularly useful in:

Magnetic field has been excluded from within the superconductor.

Electromagnetic induction in the side of the guide way and the train prevent lateral displacement of the train.

This (usually) uses electromagnets in the guideway and superconductors in the train.

We are currently conducting in-person teaching at our centres, as well as online classes. Please contact us for more information.